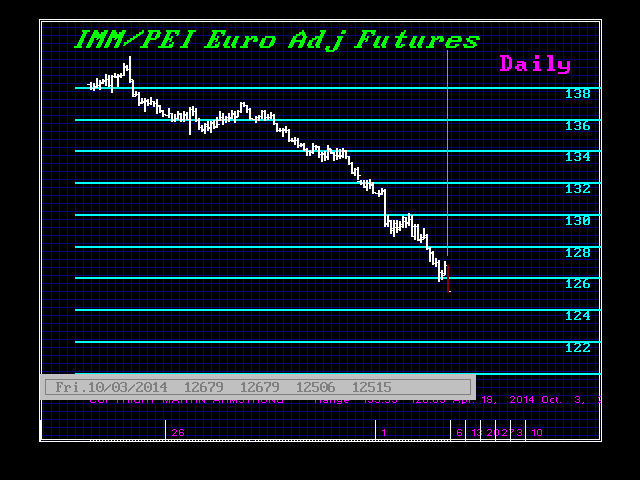 European Banks are now threatening companies with negative interest rates (penalty) when they want to simply park assets in money houses at short notice. Complaints about this practice are starting to rise quietly behind the curtain, which including operations such as airlines. According to our sources, several banks are beginning to levy this negative penalty interest upon large business customers under ECB policy. This idea floated by Larry Summers sounds like you will force investment to take place. However, we are finding simply a capital flight out of the Euro and into the dollar is contributing the free-fall in the Euro.

As always, politicians are clueless about how the economy works. People can move their cash from Euro to dollars to avoid the penalty interest and will not “invest” in Europe when they see no opportunity to invest. Even Keynes stated clearly that there are times to reduce taxes to “stimulate” the economy. Government keeps raising taxes because they need money yet attempt to force people to spend and invest when the economy is still imploding.

From a realistic problem, the ECB is now attempting to destroy many companies with this penalty interest by wiping out their short-term liquidity. If companies have no cash on hand because they spent it as the ECB desires, they would run the risk of bankruptcy unable to pay employees in an economic downturn we are likely to see 2016-2020. This policy is having a major impact upon the Euro – far more than anticipated just based upon our own clients.

Yet the problem concerns major companies in Germany listed in the DAX companies. Penalizing liquidity will be even more devastating for the small and medium-sized companies under the ECB’s policy. This is driving the Euro into a free-fall and sending capital flows into the dollar just to maintain liquidity – completely brain-dead ECB policy.

This trend becomes vastly problematic for the corporations leaving no effective alternative – end liquidity or move to the dollar. The banks themselves are responsible for the penalty interest. The low-interest rate makes it difficult for institutions to invest the money worthwhile – but dollar deposits are still better than negative and you can retain the liquidity to survive the economic storm on the horizon.

The banks are desperately trying to convince the CFO of the companies to move cash into other forms of investment. The situation remains tense, as long as the ECB conducts its low-interest rate policy. This is compounded by two additional problems (1) Banks are notoriously bad economic advisers just look at their own history of bailouts, and (2) there is the credit risk of the banks in Europe to begin with not to mention the IMF proposal to just confiscate 10% of all bank deposits. Let’s be real – it would be political disaster to confiscate from individuals and not corporations.

Then there is the problem of regulation. A managing director is forbidden to speculate with existing corporate capital for he is liable for criminal prosecution if he pulls money from the company and uses it for non-business related purposes. Yet the ECB penalty of liquidity can be very complex given the interplay with other regulations. Corporates have their hands tied in ways the ECB does not consider.Speculative transactions do not belong under the relevant jurisdiction for the purpose of normal business. The very idea of trying to force investment carries criminal liability if the directors lose money.

Penalty interest being charged on bank customers is highly dangerous in setting off capital outflows from Europe into the dollar. Capital will also flow from European to American banks as a hedge against the ECB. If a bank has to pay interest to the ECB, it is possible to shift the penalty interest paid as “fees” on to their own customers to mask the real requirement, yet this may fool individuals, but not corporates.