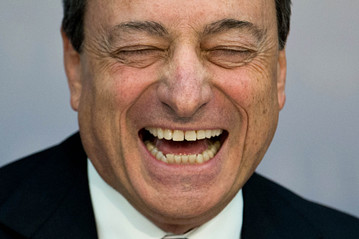 Those in government maintain a completely delusional view of the world which is the central part of the crisis that we face. Everyone else pays the price for it and this is no longer just brilliantly entertaining. This modern-day monetary delusion persists both inside central banks as well as within the halls of the elected representative pretenders who preside over the welfare of the people.

Central bankers today have a delusional view of the world where they can only see their power to manipulate society rather than that the trouble does not lie with the people, but with the Byzantine form of government that over-regulates and over-taxes. The monetary system of Byzantium collapsed forcing the Great Monetary Reform of 1092. The gold coinage became so debased it effectively was reduced to silver.

We currently have Mario Draghi, President of the European Central Bank, who is delusional at best, totally insane at worst. He has embarked on his own folly to force people to invest in an economy that is unworkable and imploding. Draghi has wiped out the savings of people and the very idea of saving for retirement. Draghi has taken certain interest rates into NEGATIVE territory and now Germany banks are actually moving to charge people to simply maintain money in a bank.

Draghi has convinced himself that he was saving Europe from disaster by moving NEGATIVE. He cannot grasp the idea that just perhaps Europe is over-taxed and over-regulated and therein lies the problem. The average German now pays more than 50% in tax annually. He just cannot imagine that the problem lies in Brussels as it absorbs a higher and higher proportion of the productive wealth of Europe.

On November 1st, the first European bank has passed along these negative interest rates to its retail customers. So if you maintain a balance of more than 500,000 euros at Deutsche Skatbank of Germany, you now have the privilege of paying 0.25% per year… to the bank. Sounds like it is time to move.

Nevertheless, there may be a crack in the armor. Some chiefs of the national Euro-banks are now criticizing Mario Draghi for his “authoritarian style of leadership and his unpredictable communication”.Many are starting to vent their anger at the dictatorial style of Draghi beginning to say he just sits there with three mobile phones. Several insiders expect that at least seven, maybe even up to ten central bankers, are hinting they will refuse to follow him down this path to absurdity with NEGATIVE interest rates. He may be putting money in the pockets of his banking buddies, but he is destroying the savers in Europe and wiping out those who are retiring. He just cannot grasp anything other than the view from the bank position looking outward.