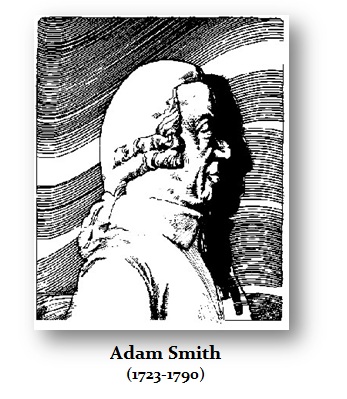 There is clearly a double edge sword to Adam Smith’s Invisible Hand. At first, there is the self-interest that combines to create the economy by everyone filling their own unique slot. Communism failed because it removed that human element and replaced it with state centralized planning. The self-interest of the individual also leads to the conclusion that two heads are better than one. Hence, civilization emerges from the collective cooperation of the individual self-interests. However, then there is the self-interest of those who for some reason desire to control everyone else and to elevate themselves above society. This has included kings, ministers, and dictators. There is the usurper who claims he is there to clean up the corruption. Oliver Cromwell kill the king and then placed his own portrait on the coinage. Napoleon assumed the right to crown himself emperor after the King of France was also killed. The usurper become typically the very thing he rises up against. John Quincy Adams said “We have conquered the enemy. We occupy their hill. We have become the enemy.” This is the essence of cyclical activity. This, it is the self-interest of man that creates a cohesive society we call civilization.  However, the collapse of society also takes place when the mood changes from cooperation to the self-interest of only the individual – out to grab whatever he can get. When that self-interest shifts like rats on a sinking ship, we get politics that becomes excessively corrupt. This is the state of affairs. Government is only pursuing its own self-interest – not that of saving society or our civilization. We have gotten the worst of the worst. There are no statesmen left. We got what we paid for.