The report put out by MINING.COM on the top 9 stories that drove gold have proven to be false, is a very interesting read that people should take to heart. The real driving forces behind gold will be one of the topics at the upcoming Cycles of War – Gold – Sovereign Debt Crisis on March 21st that we will hold in Philadelphia. Suffice it to say, I have endured the arrows of so many who have argued with me that I am wrong and the dollar will collapse and only gold will survive. I feel sorry for these people who have been sold nonsense that historically has never proven to be correct even once.

I bought all those fundamentals in 1971 and made a lot of money as gold rallied to nearly $200 from $35. All my European friends and the Swiss bankers I knew all were anticipating Gold would soar to $500 for Americans were going to be able to buy it for the first time in 1975. I was in the field. I did not see anyone lining up and had gotten not a single call. But Europeans swore Americans would be mortgaging their homes to buy gold just as they say today about China and India. I sold became I was hugely profitable and I did not see what they saw. Gold crashed falling back to about $100 nearly 50%. I noticed, like today, the fundamentals had not changed. Money was now fiat but gold still declined. The budget deficits were rising. All the same stories existed then as they do today and during the 19 year decline from 1980. ONLY A FOOL will continually argue they are still right and refuse to look at the facts. That decline opened my eyes and I then realized that the rally into 1974 when I was buying on that fundamental news that seemed to make sense. was dumb luck. 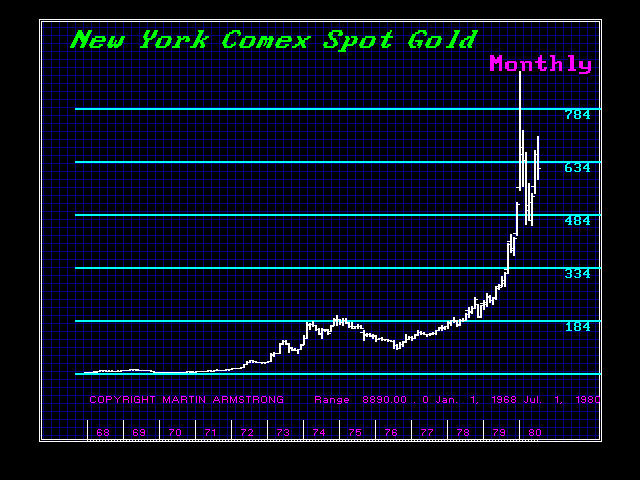 That 50% decline truly inspired me to try to figure out what makes everything really tick. Gold had fallen into January 1970 BELOW $35 the official Gold Standard price on the open market that was also no supposed to happen, The rally from there was 59 months into December 1974 just before Gold became legal for Americans in 1975. When Americans were not breaking down the doors to buy gold, the decline unfolded for 20 months before it was over. That fundamental got everyone heated in Europe just as they were convinced Indian and Chinese housewives will over power the NY financial marketplace. Gold then rallied into January 21st, 1980 on the same fundamentals again and everyone just overlooked the 20 month decline. Subsequently, gold fell for 19 years with the very same fundamentals still in place. Obviously, all the argument I have heard meant nothing as we can see again today. So the question becomes – do you want the truth – or do you want to be lied to with someone creating visions of sugar plumbs dancing in your head and a world where you will be the rich and everyone else is broke?

I have been harping on the simple fact that “fundamentals are fools” as is the common saying behind the curtain goes. Fiat is just nonsense because money need not be tangible for its role is purely as a medium of exchange – not as a store of value. It truly is John Law’s paradox of water & diamonds. Water is very valuable and life will not exist without it. Yet, it will not serve as a medium of exchange where diamonds are valuable but have no real would use for the average person (industrial diamonds excluded).

The key has never been fiat – it has always been purely confidence. There is no empirical evidence that money need be backed by anything. I have continually warned that Empires die by Deflation – not Hyperinflation that is reserved for revolutionary or fringe economies people do not trust. Then there was the spinning story of the Chinese PAGE market that would be a 10 ounce 90 day contract and it will be in China’s currency – the renminbi. This story that became wildly bullish that magically positions would now gravitate to China from COMEX  and London because of the lack of title, has also proven to be nothing but gibberish – pure sophistry.

It is time to understand the real driving forces behind gold. Stop being sold a bill of goods for when it is REALLY the time to buy, you will not act because you already heard it all before.