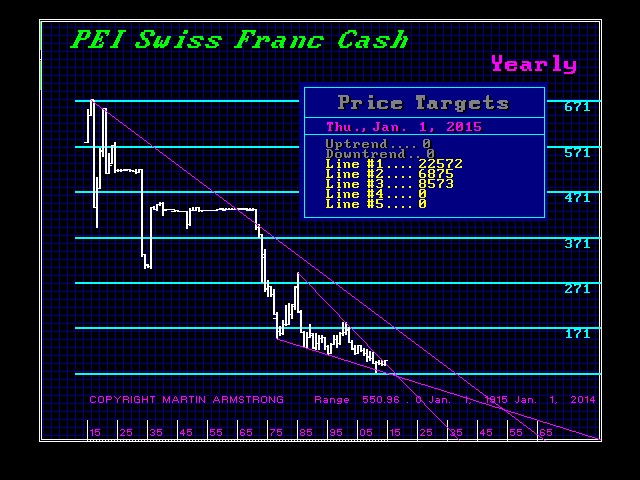 The dramatic move in the Swiss franc may have confirmed two other interrelationships. Against the dollar, we wrote at year-end “The Swiss is currently trading at 9934 and a mere year-end closing above 9785 will signal that indeed the 2011 low for the dollar will hold and that a test of the 11800 followed by 12300 level then becomes possible.”

Despite the wild move, the 2011 low was 7185 and the low on this dramatic move was 7406. The 2011 low did hold. This only warns that we will see the dollar rally as the next nail in the Euro is driven. The losses are mounting around the world showing all the so called professionals who seem to have believed mainstream media’s propaganda campaign to support the Euro. Everest Capital was forced to close its largest hedge fund. The managers were betting on a decline in Swiss francs. After the surprising decision of the Swiss central bank, the hedge fund lost more than $800 million dollars.

However, the other aspect we were watching in Switzerland was what appeared to be a peak in real estate for 2015 on a 26 year cycle. There has been a major influx of European capital fleeing into Switzerland to escape Euroland. With the surge in the Swiss against the Euro, that has created a virtual Phase Transition top in real estate for foreigners. Look to take your profits before it is too late.

« Feinstein to pocket $1 Billion Personally
The Dollar Pegs are Next »