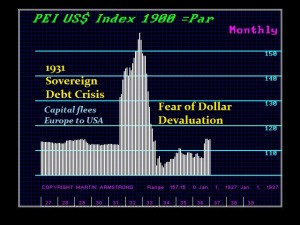 QUESTION: In your most recent post you mention dollar demand off setting Fed Printing. But fairly often we hear about new international trade agreements that have excluded the dollar. How does this figure into the equation of dollar demand?

ANSWER: Trade agreements are actually irrelevant. That is separate and distinct from reserves and the huge amount of dollar loans. Regardless of whatever you agree to make payments in, you still have to park money in reserves that are (1) liquid and (2) paying interest. That right now is becoming the dollar ONLY because the rest of the world is imploding. I can agree to sell you gold and settle in yen. The issue becomes – what do I do with the yen? The Euro could not displace the dollar as the reserve currency for its failure to create a single debt. That would be as if you used every state bonds in the US as international reserves. Boy would that be nuts! This is why banks in Cyprus failed. They had Greek debt for there was no single RESERVE currency in Europe. So the chaos in Europe is corralling the reserves at the central banks into the dollar no matter who much the do not like that. This is why they are diversifying into equity. They have NO choice!!!! It is not being “bullish” to make a profit in shares, albeit they do not want to take a loss. There are fewer options for reserves.

China is trying to strike trade agreements in the yuan. But they still have to park what they get in dollars. Do you really think they will hold Argentine currency? They dropped their Euros to under 7%. Trade agreements are trying to attack the dollar but this is still a fly tickling an elephants ear.

This is not a positive forecast. It is the forecast from hell. We also go into the eye of crisis. This one is a Sovereign Debt Crisis and as that happens, it will drive the dollar higher and create massive losses around the globe. That will play its role in undermining the global economy and push the US into recession from 2015.75 into 2020.

I understand people hate the dollar and cannot imagine a rally. That is the VERY reason the dollar will rally. Everyone and their adopted twice removed brother is short the dollar. Who is left to sell more? It is the biggest short position in history!!!! EVER!!!!! A dollar rally will turn the world upside down and cause the greatest amount of confusion and PAIN!!!!!! This is not bullish the dollar for positive reasons. It is the outstanding shorts that create the rally least expected. It is always the majority that provides the fuel to reverse the market trend. 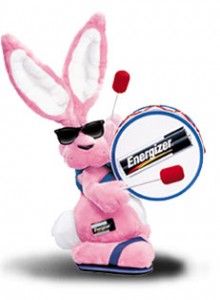 Between 1980 and 1985 the dollar rallied and kept going like the Energizer Bunny to all time highs and the NUMBER ONE belief was the dollar would collapse because of its debt the same as it is right now. The more bearish the dollar became, the more it rallied. The national debt was $907.7 billion in 1980 and at the dollar high it was $2.1 trillion by 1985. So there too, the supply more than doubled yet the dollar rallied. $3 trillion expansion to $17 trillion is only an expansion of 17% – far less than the rally between 1980-1985. As the chaos increases forcing more and more capital into dollars, the supply is not enough to replace the entire world.

The majority MUST always be wrong. Right now, tons of debt was created lending dollars like the Mortgage securities in 2007 on the pretense of how much you would save in interest. A rise in interest rates now will send the dollar soaring. Beware the short dollar. For now, the most pain is to wipe out the short dollar positions. So you have to go up before you crash and burn as was the case in 1931.

« Phase Transition In the Dow?
Nigel Farage – Today May 8th Fate of Europe »