Do the Fed’s Really Own the Land in Nevada? Nope!

QUESTION: Is it true that nearly 80% of Nevada is still owned by the Federal Government who then pays no tax to the State of Nevada? This seems very strange if true as a backdrop to this entire Bundy affair.

You seem to be the only person to tell the truth without getting crazy.

REPLY: The truth behind Nevada is of course just a quagmire of politics. Nevada was a key pawn in getting Abraham Lincoln reelected in 1864 during the middle of the Civil War. Back on March 21st, 1864, the US Congress enacted the Nevada Statehood statute that authorized the residents of Nevada Territory to elect representatives to a convention for the purpose of having Nevada join the Union. This is where we find the origin of the fight going on in Nevada that the left-wing TV commenters (pretend-journalists) today call a right-wing uprising that should be put down at all costs. The current land conflict in Nevada extends back to this event in 1864 and how the territory of Nevada became a state in order to push through a political agenda to create a majority vote. I have said numerous times, if you want the truth, just follow the money.

The “law” at the time in 1864 required that for a territory to become a state, the population had to be at least 60,000. At that time, Nevada had only about 40,000 people. So why was Nevada rushed into statehood in violation of the law of the day? When the 1864 Presidential election approached, there were special interests who were seeking to manipulate the elections to ensure Lincoln would win reelection. They needed another Republican congressional delegation that could provide additional votes for the passage of the Thirteenth Amendment to abolish slavery. Previously, the attempt failed by a very narrow margin that required two-thirds support of both houses of Congress.

The fear rising for the 1864 election was that there might arise three major candidates running. There was Abraham Lincoln of the National Union Party, George B. McClellan of the Democratic Party, and John Charles Frémont (1813–1890) of the Radical Democracy Party. It was actually Frémont who was the first anti-slavery Republican nominee back in the 1940s. During the Civil War, he held a military command and was the first to issue an emancipation edict that freed slaves in his district. Lincoln maybe credited for his stand, but he was a politician first. Lincoln relieved Frémont of his command for insubordination. Therefore, the Radical Democracy Party was the one demanding emancipation of all slaves.

With the Republicans splitting over how far to go with some supporting complete equal rights and others questioning going that far, the Democrats were pounding their chests and hoped to use the split in the Republicans to their advantage. The New York World was a newspaper published in New York City from 1860 until 1931 that was the mouth-piece for the Democrats. From 1883 to 1911 it was under the notorious publisher Joseph Pulitzer (1847–1911), who started the Spanish-American war by publishing false information just to sell his newspapers. Nonetheless, it was the New World that was desperately trying to ensure the defeat of Lincoln. It was perhaps their bravado that led to the Republicans state of panic that led to the maneuver to get Nevada into a voting position.

The greatest fear, thanks to the New York World, became what would happen if the vote was fragmented (which we could see in 2016) and no party could achieve a majority of electoral votes. Consequently, the election would then be thrown into the House of Representatives, where each state would have only one vote. Consequently, the Republicans believed they needed Nevada on their side for this would give them an equal vote with every other state despite the tiny amount of people actually living there. Moreover, the Republicans needed two more loyal Unionist votes in the U.S. Senate to also ensure that the Thirteenth Amendment would be passed.  Nevada’s entry would secure both the election and the three-fourths majority needed for the Thirteenth Amendment enactment. 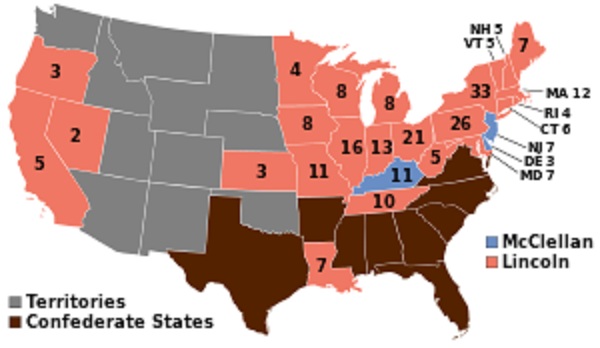 The votes at the end of the day demonstrate that they never needed Nevada. Nonetheless, within the provisions of the Statehood Act of March 21, 1864 that brought Nevada into the voting fold, we see the source of the problem today. This Statehood Act retained the ownership of the land as a territory for the federal government. In return for the Statehood that was really against the law, the new state surrendered any right, title, or claim to the unappropriated public lands lying within Nevada. Moreover, this cannot be altered without the consent of the Feds. Hence, the people of Nevada cannot claim any land whatsoever because politicians needed Nevada for the 1864 election but did not want to hand-over anything in return. This was a typical political one-sided deal.

Republican Ronald Reagan had argued for the turnover of the control of such lands to the state and local authorities back in 1980. Clearly, the surrender of all claims to any land for statehood was illegal under the Constitution. This is no different from Russia seizing Crimea. The Supreme Court actually addressed this issue in Pollard’s Lessee v. Hagan, 44 U.S. 212 (1845) when Alabama became a state in 1845. The question presented was concerning a clause where it was stated “that all navigable waters within the said State shall forever remain public highways, free to the citizens of said State, and of the United States, without any tax, duty, impost, or toll therefor imposed by said State.” The Supreme Court held that this clause was constitutional because it “conveys no more power over the navigable waters of Alabama to the Government of the United States than it possesses over the navigable waters of other States under the provisions of the Constitution.”

The Pollard decision expressed a statement of constitutional law in dictum making it very clear that the Feds have no claim over the lands in Nevada. The Supreme Court states:

The United States never held any municipal sovereignty, jurisdiction, or right of soil in and to the territory of which Alabama, or any of the new States, were formed, except for temporary purposes, and to execute the trusts created by the acts of the Virginia and Georgia legislatures, and the deeds of cession executed by them to the United States, and the trust created by the treaty of the 30th April, 1803, with the French Republic ceding Louisiana.

So in other words, once a territory becomes a state, the Fed must surrender all claims to the land as if it were still just a possession or territory.

Sorry, but to all the left-wing commentators who call Bundy a tax-cheat and an outlaw, be careful of what you speak for the Supreme Court has made it clear in 1845 that the Constitution forbids the federal rangers to be out there to begin with for the Feds could not retain ownership of the territory and simultaneously grant state sovereignty. At the very minimum, it became state land – not federal.