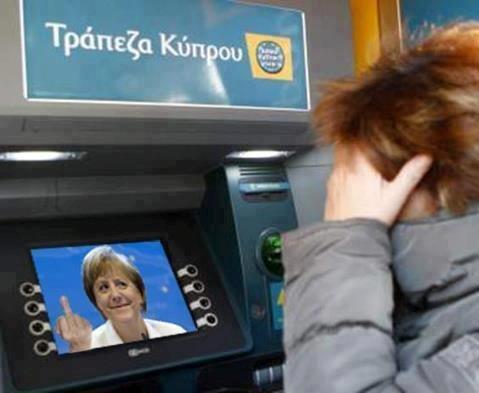 From sources in Cyprus: “They just voted on measures a little while ago which will seize portion of everyone’s savings.”

Cyprus ATMs basically say up yours.

To be impartial here, the politicians rushed to get the Euro through, came to us and I warned there had to be a single national debt. The response was that would come later for they did not think they could sell that to the people at that time. Hence, all the banks had to be politically correct. All member states’ bonds became reserve quality. Now we have a complete banking failure BECAUSE of these brain-dead political decisions. This is the fault of politicians who DO NOT KNOW what they are doing, have ABSOLUTELY NO experience in the financial markets, and are largely lawyers. That is it!!!!!! The future of everyone and everything now lies in the hands of people who only are concerned about their PERSONAL election careers – not the fate of the world, the economic system, or the dangers of war that they constantly visit upon us by their stupidity.

Politicians should be BARRED from playing with the economy, prohibited from borrowing, and are incapable of designing anything when they have no experience in the field.