Cycle of War – the 6th Wave

QUESTION: Does your volatility wave based on units of 6 also apply to the Cycle of War since your 8.6 year wave builds in intensity into 6 waves of 51.6 years?

Thank you for all you provide. You do open minds.

ANSWER: Absolutely. In fact, this is why I am concerned with this particular wave because it is the 6th Wave since the Civil War. If you go back 6 waves from 2014 we reach the Civil War where more people died than in World War I or II. But the civil unrest that emerged in the aftermath has been the highest we have previously seen in the USA where federal troops were actually called into many cities and gun battles took place on the streets between the people and government troops. 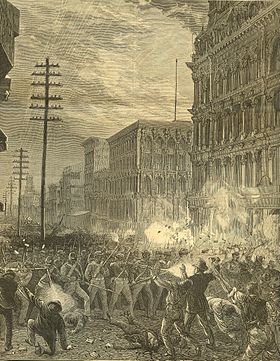 The worst of the civil unrest erupted exactly on the half cycle 13 years into the wave after the Civil War had actually ended. This became known as the Great Railroad Strike of 1877, that is also sometimes referred to as the Great Upheaval. It began on July 14 in Martinsburg, West Virginia, and ended some 45 days later only after it was put down by local and state militias, and federal troops. Here is an illustration from Harpers of one battle in Baltimore on July 20th. Numerous cities were set on fire, Pittsburgh, Philadelphia, Baltimore, Chicago, St Louis and others.

Labor unions were not involved and in fact these incidents are what later led to the formation of unions. These violent insurrections were spontaneous outbreaks in numerous cities of violence against railroads who first cut wages in the recession by 10% and then imposed a second wage cut. It was this uprising that later led to just laying people off rather than reducing wages retaining the same work force. Wages simply became inflexible.

I will deal with this issue more at the Cycle of War – Gold – Sovereign Debt Crisis Conference on March 21st. But yes. This is the 6th Wave and it appears to be one of high intensity. The 1877 crisis came on the heals of the collapse of J. Cooke, who was the first primary dealer selling US government debt. So a debt crisis was also linked to that 6th Wave not to forget the massive default of Confederate Debt in the South that wiped out personal savings as well.