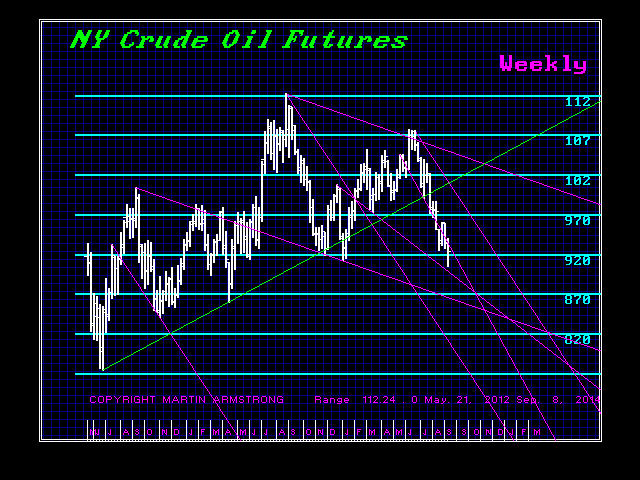 The global demand for oil is declining as the United States moves toward self-sufficiency and is the only nation still in a positive economic trend. Everywhere else we see the global economy turning down since 2007 including China and Russia no less Europe. But the level of pessimism in the USA does not imply a bull market for commodities no less oil.

The oil price has fallen in the past week for the first time since one and a half years under the $ 100 mark dropping to test the $90 level. On our models, the critical support lies at $92 and $82 going into 2015. A year-end closing below $92 will shift oil into a neutral position whereas a 2014 closing below $82 will warn of a sharp decline cannot be ruled out.

The global oil demand rose by only 500,000 barrels of crude oil per day, according to the International Energy Agency (IEA) in the second quarter. This increase in oil demand is the lowest in almost 3 years. The only place where demand has risen is in North America, whereas in Europe and Asia demand has been noted generally less. The recent slowdown in demand growth is exceptional in fact but the rising levels of taxation and the rise in draconian policies in Europe to bail out banks and municipal governments has seriously impacted expectation no less the fact that youth unemployment remains over 60%. This has impacted everything and is even sending marriage trends back to the 19th century where the age differentials are widening drastically. Girls are marrying increasingly older men to be able to start families since those near their own age in Europe are the equivalent of marrying someone virtually homeless living with their parents.

Despite the ongoing conflicts in countries such as Iraq and Libya, the global supply of oil continues to be strong. The major Iraqi oil fields are located in the southwest of the country and thus beyond the reach of the Islamic State. Libya could even increase massively its delivery despite the civil war in the country. In addition, the fracking boom is in North America.

Saudi Arabia, the largest oil producer in OPEC, lowered his deliveries in August by 330,000 barrels per day to 9.68 million barrels a day in response to the low demand of the customers. Saudi Arabia’s production will see further decreases in hopes of stabilizing the price of oil. Saudi’s oil exports may already fallen to 7 million barrels per day – the lowest level since September, 2011.

The OECD lowered on Monday its global growth expectations. In the Euroland, where it expects a GDP growth of just 0.8 percent for this year and that is really optimistic. The rising pessimism on a global scale is clearly reflected in the energy prices. This is not a political plot against Russia as some claim. This is a reflection of the serious economic decline we are in thanks to Marxism. Communism failed – it is simply the West’s turn to experience the same result. 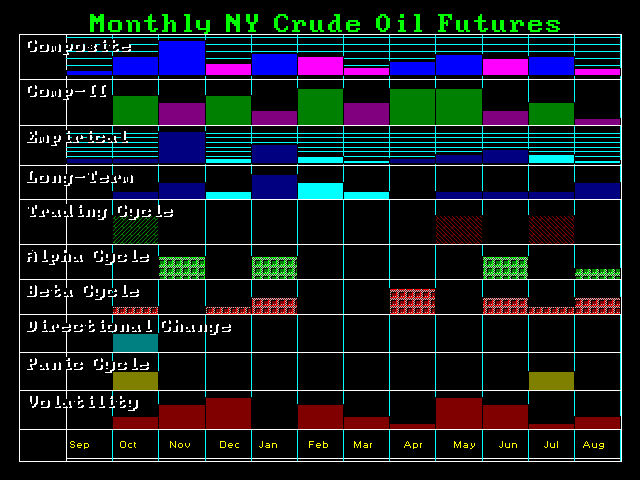 We see volatility rising from October. With the Middle East in turmoil and the War Cycle kicking in, hold on to your hat – energy is starting to kick up it heels going into year-end.