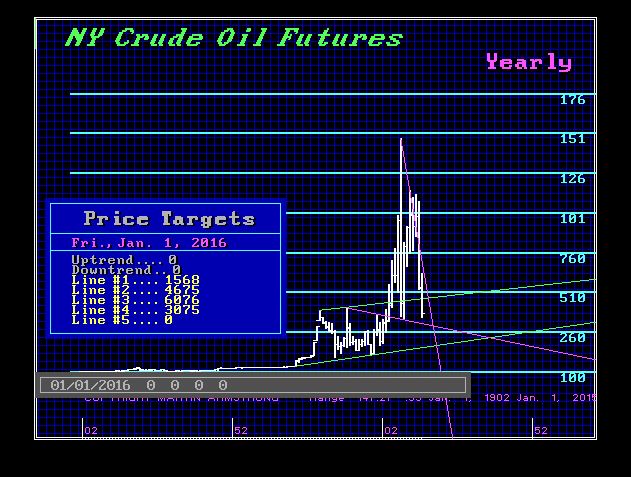 We had THREE Yearly Bearish Reversals in crude: the first was $41, the next $35 and $32, but then there was also $25. We achieved the first one but not $35. This warns of lower lows here in 2016, but it does not imply $12. Typically, when you trade BELOW a Yearly Bearish like $35 and rally to close above it, it is NOT a buy signal since you are still electing the $41. However, it does warn that a complete collapse is not likely.

This is most likely reflecting what is coming after 2017. This, in part, is also intermingled with the slingshot vs. the Phase Transition. The former would EXTEND the cycle and suggest that 2017-2020 would be the chaotic period; a Phase Transition would imply a conclusion by 2017. That is the difference. Neither one is yet confirmed as we have been stating. Therefore, it is curious that this seems to be lining up with crude.

We have technical support during 2016 in crude at the $30.75 level. Our model shows resistance at $40 and support at $25. Therefore, it does not appear that we would see crude collapse to the $10-$15 level that some have been calling for. This is most likely why crude rallied to close above the $35 number. It merely avoided a devastating sell signal where at least $25 would have been guaranteed.