Your story (of the little girl) tears at my heart.  However, it is one thing to feel sorry for her, but another to do something to actually help her.

A few years ago, we adopted three little girls who were born to drug addict parents.  I wonder how difficult it would be to start a home for runaways.  Having gone through the adoption process I know it might be difficult working with CPS.

You are so very correct…..compassion is not a sin and we certainly need more of that in this dog eat dog world.  If only more of the ones in the highest places had compassion on others we wouldn’t see such insane greed and disinterest in the masses.  They really need a “Scrooge Event” to wake them up.

Have a very Merry Christmas! 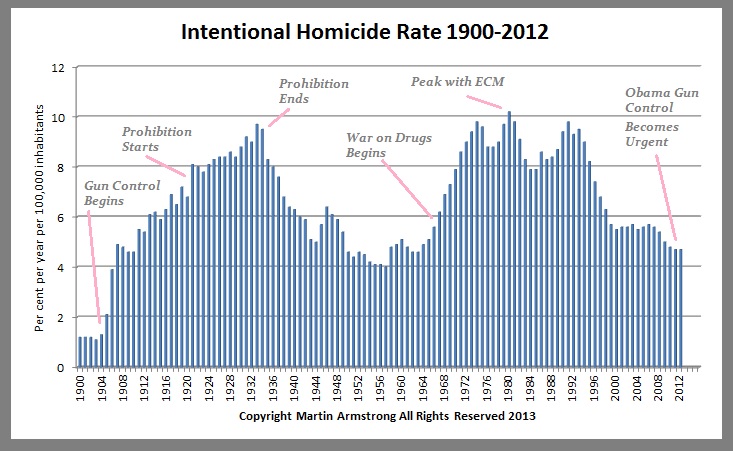 REPLY: It was not my intention to get into a conversation about religion etc. I believe in the freedom to believe. However, “crime” is part of the cycle as well and we also input those statistics into the model. If it can be tracked with a database, we generally input that into the system as well. In this manner, it is able to forecast trends that are inter-related and the correlated discoveries are fascinating. When you correlate crime, what emerges is interesting for it moves with the ECM. The paradox that is revealed is simply the more you seem to try to outlaw something, the worse it actually gets. Why? The outlawed activity becomes a profitable tax-free industry. Prohibition funded the Mafia, which made them a fortune on booze. Previously, it was just minor crime.

The evidence that emerges from global correlations illustrates that suddenly gun control is urgent yet we are a lows not highs. This has nothing to do with helping people or making the streets safer. This is about controlling the people when the shit-hits-the-fan as they say. The truth behind politics is always revealed by the data. Mainstream press tend to be the ones manipulating news events focusing only on one issue to support an agenda. 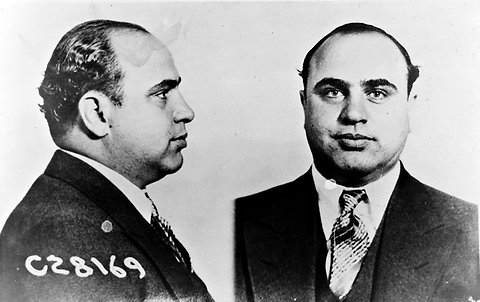 Nevertheless, there is a paradox that emerges from the data. How many people died over trying to enforce Prohibition? Elliot Ness and the Untouchables were the subject of legend and movies.They even made a song about the Night Chicago Died. The more you try to outlaw something, statistically the worse it seems to get. This paradox is also an infliction among traders. The more cautious someone is in trading trying to limit losses, the more they micro manage trading. The result is pure disaster. The more they micro manage – the more they lose because they are trying to be conservative and fear losing money. 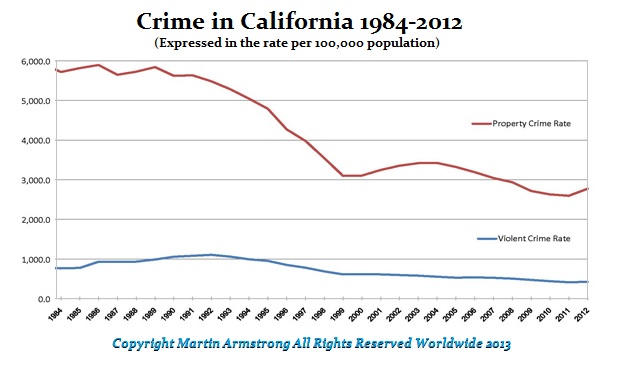 Here is a chart distinguishing between violence and property crimes in California. As this Private Wave began, property crimes have declined after peaking in 1981. They rose sharply during the Great Depression and they will be on the rise again after 2015.75. This is part of the cycle inversion process. Property crime rises in a Private Wave with the decline whereas it tend to rise with the trend during a Public Wave.

Having a number of young girls who work for me and it is at times necessary that they travel, I have to be mindful of the atmosphere. Girls are being kidnapped in Southern Europe as economic conditions get worse. Girls have been kidnapped from London. You may be shocked, but the trend has moved to the United States and young black girls are being kidnapped in Washington, DC for the sex-trade. It is so bad in India in some places, foreign girls are placed on women only floors in some hotels and are guarded 24/7.

I have to be protective of staff and ensure that someone is there to meet them when they land. I may be just an employer, but I am responsible for their well-being when they have to travel. This is the world we live in and as the economy turns down in many places the risks increase.

This tends to be part of the whole civil unrest process that as the economics gets worse, the rise in civil unrest and crime go hand-in-hand.