Crabs in a Bucket

Thank you so much for the monthly study you just posted.  This is incredible historical data that will provide tremendous insight into using your reports going forward.

I appreciate all you are doing to ring the bell to awaken the sleepers.

I don’t know if you or any in your family served in the military, but if they did, I wish you and them a happy Veteran’s Day! 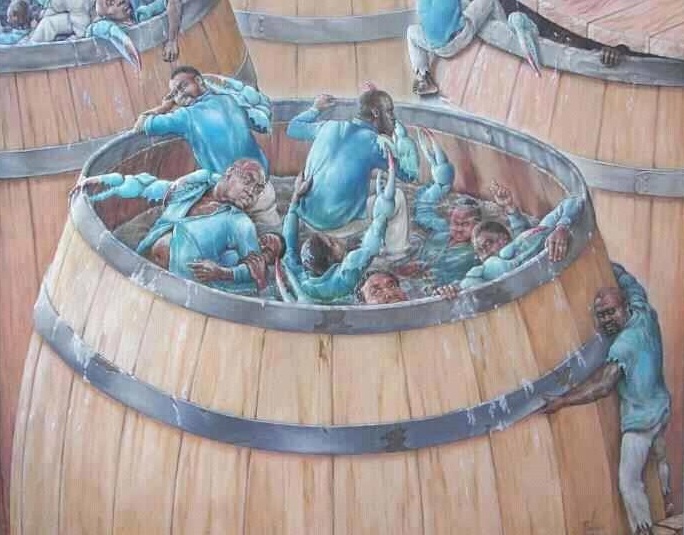 REPLY: Thank you. Far too many people are only out for themselves. They are like crabs unable to escape from a bucket because all they do is try to pull down the one in front. They are trapped within their own self-interest and lack any concept of how to get ahead because they are fixed on grabbing every penny in front of them. Just throw some money on a table and watch how fast they try to steal it. Crabs cannot escape a bucket even with no lid any more than society can escape its fate because the majority of people are just crabs incapable of working together. My whole life has been nothing but people trying to steal the model assuming they will have unlimited wealth. It gets very disgusting to have to endure such characters.

Yes, my family has fought in every war since the American Revolution. My lineage goes back to New Amsterdam – the name for NY City given to it by the Dutch, A cousin even has the musket used in the American Revolution by my ancestor. But this Veteran’s Day I spent in a breakfast meeting visiting Capital Hill so you know it was not just plain vanilla to meet on a holiday.

I try to contribute what I can in hopes it will become viral among the small proportion of people who are not the stupid crabs. There is a small gathering on the Hill that is starting to notice after the Debt Ceiling Crisis and the sudden shock of losing independence because of the debt. There may be some pretend noise to put on a show, but there will be no crisis and shut down again.

The opposite side is becoming more evil by the day. They outright want to know everything about everyone. The popular vote in Germany would be to give Snowden political asylum. The right-wing US in Washington think they must be a lot of commie bastards. Even Merkel, who never trusted phones growing up in East Germany, has very few comments about America and apparently from good inside sources thinks Obama is a disaster and dislikes him personally. She commented, the difference between the NSA and the East German Stasi, was that the Stasi did not get caught,