QUESTION: Mr. Armstrong; I read your take on Constantine that he was just another politician who told his troops he saw a vision in the sky. He then had his troops put crosses on their shields because he faced an army twice his size and that his opponent was Christian who built the first Christian Church in Rome. I suppose this is what you mean by the Establishment Academics manufacture history. Is there any other evidence that brought you to that conclusion?

ANSWER:  There was only one coin ever issued just one time by Constantine with any Christian symbol. This was issued briefly in 327-328AD and is quite rare. All his other coins are standard Pagan type issues even years after his victory at the Battle of the Milvian Bridge that took place between the Roman Emperors Constantine I and Maxentius on October 28th, 312. Constantine entered Rome on October 29th. He staged a grand entrance into the city. He did everything possible to pretend it was a popular jubilation. He ordered Maxentius’ body to be fished out of the Tiber River where he had drowned and decapitated the corpse parading he head on a pike through the streets of Rome  for all to see. 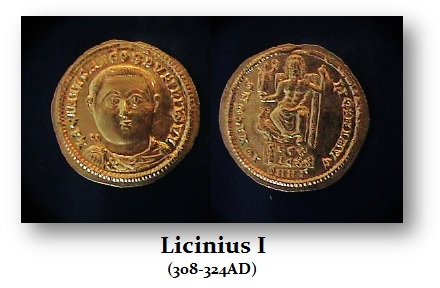 Shortly after his victory, in February 313, Constantine met with Licinius in Milan, where they developed the Edict of Milan. The edict stated that Christians should be allowed to follow the faith without oppression. While this removed penalties for professing Christianity and returned all confiscated Church property, the edict ALSO protected from religious persecution ALL religions. This was the birth of freedom of religion allowing anyone to worship whichever deity they chose – not the state decree of Christianity. 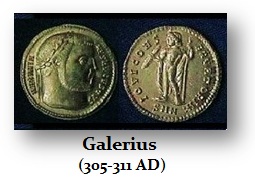 Before the victory over Maxentius, another similar edict had been issued in 311 by
who was the senior emperor under the Tetrarchy that began the process granting Christians the right to practice their religion. Therefore, Constantine did not initiate anything in that regard. 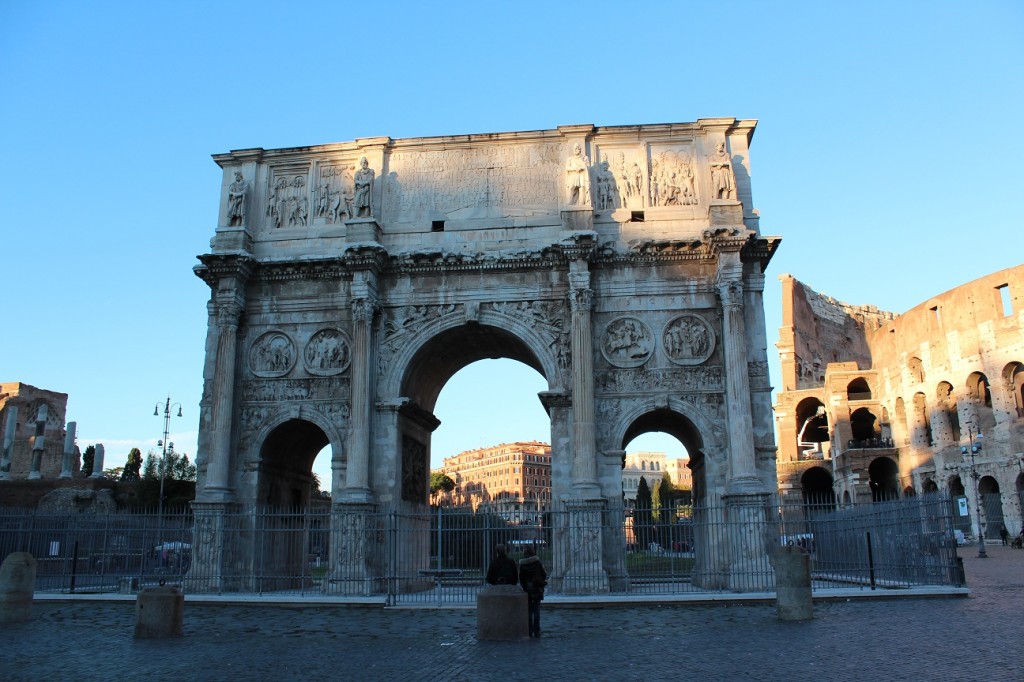 Constantine certainly did not patronize Christianity alone. After gaining victory in the Battle of the Milvian Bridge in 312AD, he constructed in 315AD a triumphal arch that still stands by the Colosseum. —the Arch of Constantine. The arch is decorated with images of the goddess Victoria. At the time of its dedication, sacrifices to gods like Apollo, Diana, and Hercules were made. Absent from the Arch are any depictions of Christian symbolism whatsoever.

Later in 321, we end up with Christmas being December 25th for Constantine instructed that Christians and non-Christians should be united in observing the venerable day of the sun, referring to the sun-worship that Aurelian had established as an official cult. This became Christmas since nobody knew the birth date of Christ. This was a political move by Constantine. Nevertheless, despite his alleged conversion to Christianity, Constantine’s coinage continued to carry the symbols of the sun – not Christian. Other than this single coin issued 327-328, there are no other Christian symbols on coinage of Constantine. 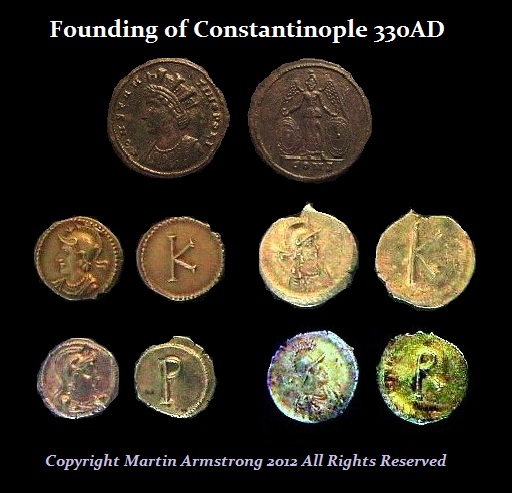 Constantine’s new capital of the Roman Empire by Constantine the Great, after whom it was named, and dedicated on 11 May 330. Even when Constantine dedicated the new capital of Constantinople, which became the seat of Byzantine Christianity for a millennium, he did so wearing the Apollonian sun-rayed Diadem; no Christian symbols were present at this dedication. He issued special coins to commemorate the opening. However, again there is an absence of Christian symbols.

Constantine’s monetary policy clearly used religion as a cover no different from taxing just the rich or global warming are used today to hide the real thirst for money. The money supply of Constantine increased in direct proportion with measures of his confiscation of the wealth of Pagan temples. Beginning in 331AD until about 336AD, all gold, silver and bronze statues from pagan temples were declared as imperial property and, as such, as monetary assets. Two imperial commissioners for each province had the task of getting hold of the statues and having them melded for immediate minting into coinage to fund all his expenses. There were few exception such as a number of bronze statues that were used as public monuments for the beautification of the new capital in Constantinople.

The persecution of pagans in the late Roman Empire began late during the reign of Constantine the Great, when he ordered the pillaging and the tearing down of some temples. The first anti-Pagan laws by the Christian state only started with Constantine’s son Constantius II, who was a more unyielding opponent of paganism. It was Constantius II who actually ordered the closing of all pagan temples and forbade Pagan sacrifices under pain of death. He also removed the traditional Altar of Victory from the Senate, not his father. It was under the latter Constantius II’s reign when ordinary Christians started vandalizing many of the ancient Pagan temples, tombs and monuments. 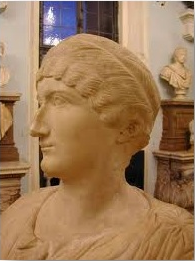 Constantine’s mother, Helena, was a real devoted Christian. She traveled the Holy land and built churches everywhere something took place. She built the churches in Bethlehem and the church that enclosed Calvary and Christ’s Tomb. 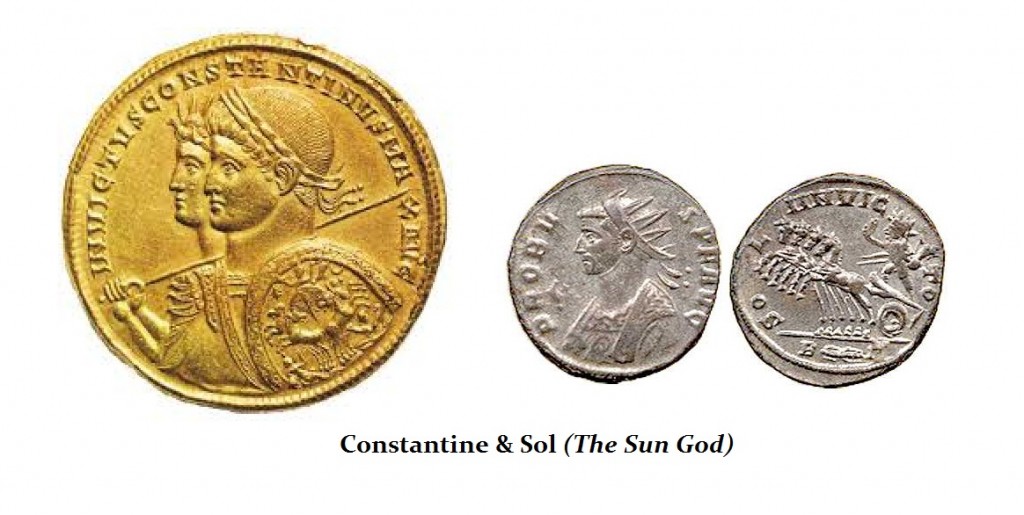 Nonetheless, Constantine strangely issued coinage with Sol – the sun-god, well after his victories. He also did not bother to get baptized until on his death-bed. Some have argued he did not get Baptized until he died for that would remove all sins in his life. Clever – but risky. There is no empirical evidence that he confronted a Pagan army. Curiously enough, the many Christians following Maxentius did not embrace Constantine. Proof of this fact is that the conquering emperor would seize the scepter of his opponent. The ONLY scepter to have survived from a Roman Emperor is that of Maxentius. The Christians hid that scepter to deprive Constantine of his moral victory. Why? Who knows. Some have argued because they did not believe Constantine and his claimed vision. They saw him as a fraud. Perhaps. Whatever the issue, the scepter is the only one to survive out of the entire Roman Imperial era. (Note: the Earth is depicted as a globe – not flat).

The first Christian Church remains right there today in the Roman Forum built by Maxentius – not Constantine. These inconsistencies call into question the claims he saw a vision. It was the only way he could defeat Maxentius by disrupting his Christian Army to show them they were not Pagans. He then confiscated all the wealth of the Pagan temples to fund his new city – Constantinople. The proposition that there was one God served him politically arguing there should be just one Emperor as well.

I understand Constantine to many was considered a Saint. The single act of making Christianity the state religion had its economic benefits. That cannot be set aside because of religion. Constantine did not face a Pagan army. That is simply fact.