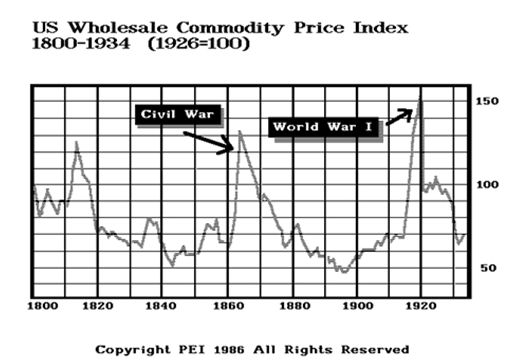 Commodities have always been subject to huge swings in the booms and busts of history. Kondratieff did his research on the 19th century and as such his wave is not indicative of the modern economy since it has moved from a 70% employment commodity base to less than 5%. This does by no means negate Kondratieff’s work. What it means is that his long-wave start and ending points are aligned with commodities rather than the economy as a whole. That make it valuable if you understand how to focus his work.

Where the Economic Confidence Model was derived from financial panics irrespective of the market and hence tracks the emotion booms and busts and how they change sectors, Kondratieff’s work suggests that we are in another commodity cycle that began 1999-2000 in nominal terms and thus should peak about 26 years from there using the timing from the ECM to gauge the ideal target. Since the Kondratieff wave was not a transverse wave meaning the wavelength varied, this tends to imply we may see the “real” high in commodity prices (adjusted for inflation) form in line with the ECM in 2032. This is by no means a straight linear progression. There will be booms and busts along the way. Therefore, that is when we will see the final REAL high in gold, agriculturals, metals, etc.

« Lies – Lies – & More Lies – Why We Are Screwed!
FORCED LOANS THEY CAN TAKE YOUR MONEY GIVING GOV’T BONDS »