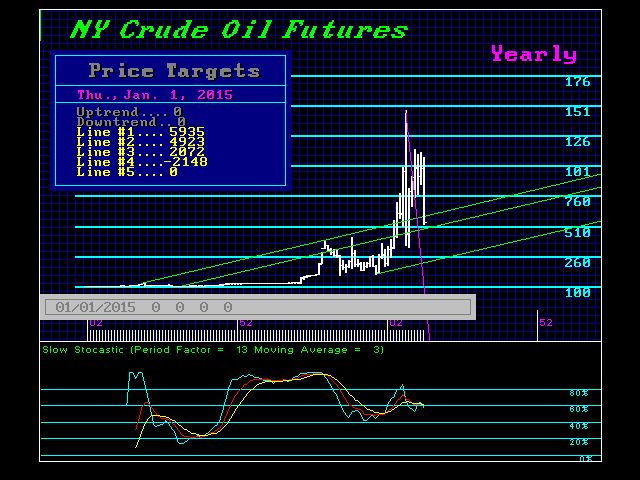 Equity markets around the globe have tumbled on Monday, led by commodity-linked shares as oil prices fell to 5-1/2-year lows and investors fled to the safety of government bonds. The so-called “smart money” is running into bonds and this is what we need to complete the bubble in bonds that will burst for BIG BANG.

Brent and U.S. crude oil prices dropped to their lowest levels since spring 2009. The global supply expansion is the cause combined with the recession that is underway everywhere outside of North America. As taxes rise, people have less disposable income and this sets in motion the economic decline. Even the virtual French Communist President Francois Hollande has been proven dead wrong. His 75% “super-tax” on the rich in 2012 only led to the rich fleeing and destroyed the French economy. After 2 years, the damage to France’s appeal as a home for top earners who create jobs may have collapse to level not seen since Cuba. The tax pickings from the levy were paltry to put it in the best light. Personal, I would just retire and stop working for the government and it appears many French did just that. Hollande severely damaged France’s competitiveness and has driven a nail into the heart of Euroland.

The global supply in oil has resulted in a major glut and lackluster demand as the economy declines. Strength in the U.S. dollar has contributed the collapse in oil prices and will continue to do so. The dollar has reached a near nine-year high against the euro and this is right on target for what out model has been forecasting.

Russia’s oil output hit a post-Soviet high in 2014 as Putin intended to use the income to rebuild Riussia into a major world power again. At the peak, Putin even assumed he had a new weapon – energy to beat the Europeans into submission. Iraq’s oil exports in December were the highest since 1980 demonstrating this was not a CIA plot, but a massive peak in crude oil output.

Crude close 2014 BELOW $57 and now we should eventually see a collapse to the $31-$35 area as time unfolds. Oil producing nations expanded their budgets assuming money would continue to fall from above. However, this is the DEFLATION we have been warning is coming – not inflation. The inflation is the rising cost of government and the economy shrinks and whatever could go wrong is going wrong precisely as our computer has been forecasting.

Political uncertainty in Greece, has renewed fears of a Greek exit from the Euroland rattling European stock markets ahead of the country’s elections later this month. The dollar keeps rising and we achieve a YEARLY BEARISH REVERSAL in the Euro for the closing of 2014. You cannot get any more BEARISH that electing a yearly. The same is true in the Swiss.

The concerns about Greece and Europe’s economy helped push long-dated U.S. Treasury yields to their lowest levels since August 2012. The yield on the 30-year U.S. Treasury bond was last at 2.604 percent after touching a low of 2.592 percent. German 10-year Bund yields hit a record low of 0.492 percent. This is confirming our warning that the BUBBLE is not in equities – it is in bonds.