I´m writing to you from Santiago of Chile, to congratulate you for your amazing research, about the Economic Confidence Model and to ask you:

1. What is the correct model to predict the uptrends and downtrends of the Spot Gold Index?.

2.- What are the main differences between the E.C.M. and the 64-Year Cycle Wave?. 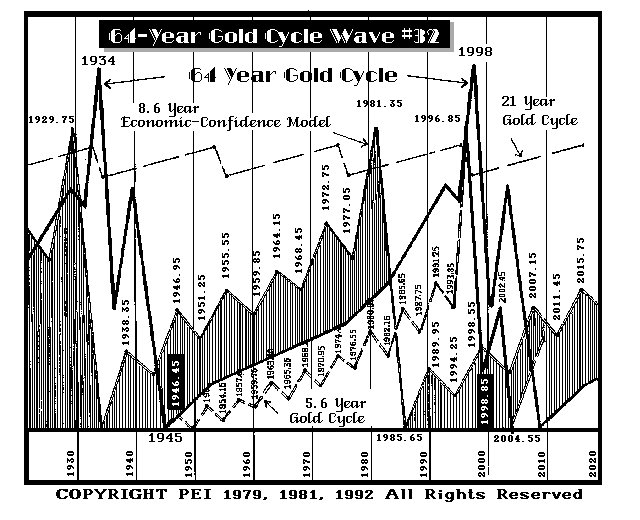 ANSWER: Each item be it commodity, stock, bond, or real estate, has its own cycle. The significance of the ECM is significant. It is the GLOBAL composite frequency or the cycle of life. What becomes clear is that people will change direction every 4.3 years. They shift their focus from one sector to another and nations. The question becomes what line-up with the ECM will get the attention. Her is our 64 year cycle in gold. The two turning points were 1934 (FDR’s confiscation) and 1998 the low in real terms for gold. Because gold has been “money” during this wave, it responds in the opposite direction of an investment. Inflation means down and deflation means up for whatever is “money” at that time.

The new wave thus began with gold at its historic purchasing power low. The previous 64-Year Wave peaked in 1870 with the purchasing power high in gold. The gold rally that began in this wave formation was the first 13 years into 2011/2012 (intraday/closing). This is why we forecast a 2-3 year decline and the resumption of a bull wave. There will be a near-term high after 2016 but we are in the final stages of the last 2 waves of the ECM that peaks in 2032, These are the Phase Transition waves and we should see greater volatility. The next MAJOR high for gold will be 2032. Ideally, gold should invert. This means the wave 2015.75 to 2020.05 followed by 2024.35 should produce a high in 2024 and then begin to line-up with the ECM. If that happens, then the major high will be 2032, a correction, and then the highest high in purchasing power terms will be 2062 but the dollar may not exist at that time to offer a currency in which to measure that high. We will deal with this issue in the upcoming Gold Report and a new book is coming out on the ECM next year.