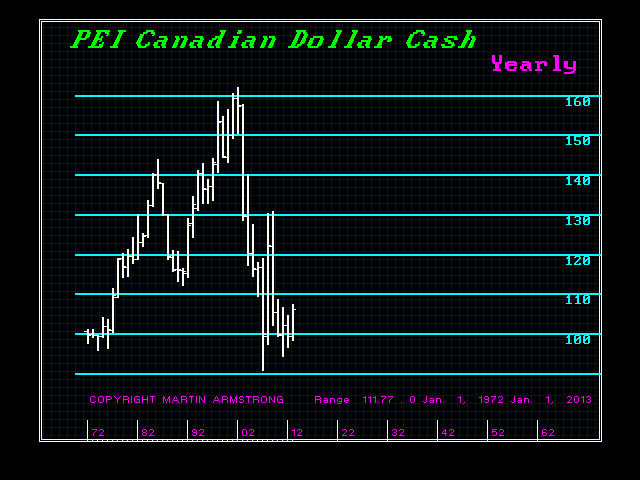 QUESTION: Mr. Armstrong; I understand you will be speaking in Vancouver tonight. Given the size of the audience, could you at least answer one question about the currency. You said the dollar would decline following gold’s lead. It is true that the currency has declined by more than 10%, but it did not make a new high in 2011 with gold. Can you explain the implication for that looking forward?

Thank you for always remembering Vancouver

ANSWER: You have to keep in mind that cyclical forces function both INTRADAY as well as on a CLOSING BASIS. We have the same variation in gold with the intraday high forming in 2011 but 2012 was the highest yearly closing. In the case of the C$, it is true that the intraday low came 5 years from the high on a perfect bear market cycle. There was a brief reaction and a turn back down for the Greenback. However, 2011 was the reaction low but the LOWEST annual closing for the entire move was that of 2012, the same as we saw in gold. So the model was satisfied and the C$ fell 11%. The primary target resistance for the Greenback stands at the 118 level. From every perspective, the Greenback is rising in a sea of political confusion. No one can believe it and the short positions are staggering against the Greenback. Nevertheless, it has to rise to clean out the shorts that cannot grasp that CONFIDENCE establishes value – not supply.