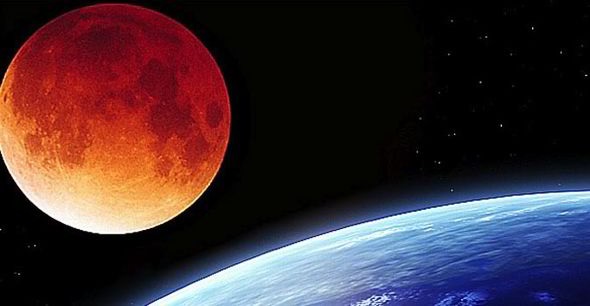 The first three total eclipses in this lunar tetrad occurred on

The last eclipse of the tetrad will occur on September 28, 2015, which lines up two days before the turning point September 30th/October 1st. According to NASA, the current century – 2001 to 2100 – will have eight tetrads. The first tetrad of the 21st century took place in 2003, and the second will happen in 2014-2015. The first eclipses in each of these tetrads will occur between March and May.

Italian Astronomer Giovanni Schiaparelli calculated that the occurrence of such tetrads varies over centuries. Some 300 year intervals have several lunar tetrads, while other 300 year intervals do not have any. For example, the years between 1852 and 1908 did not have any tetrads, whereas the next 3 centuries will have 17 tetrads. This is how cycles function for there are multi-dimensions to such interactions.

In recent years, the term Blood Moon has become popular when referring to Total Lunar Eclipses because of the color. When the Earth eclipses a full Moon, the direct sunlight is blocked, but the sun’s rays still light up the moon. This light, however, has travelled through the Earth’s atmosphere first, and sometimes causes the totally eclipsed Moon to look red or brownish.

Some have latched on to this as yet another End-of-the-world Prophecy. I am not sure why they always want the world to end, but that does not appear in the cards or entrails.
Some people believe that the tetrad has special significance because the eclipses coincide with important Jewish festivals. The two April lunar eclipses in 2014 and 2015 occurred at the same time as Passover, while the October and September eclipses occur during the Feast of Tabernacle. This, they suggest, is connected to a biblical prophecy of the end of times.

The fact is, eight of the tetrads since the first century have coincided with Jewish holidays without the world going under, so there is no reason to believe that the 2014-2015 tetrad will end the world this time either. Nevertheless, this may be more of a marker for a major change in trend rather than the end of the world. At least on our models, everything is lined up from economics to war.

The first four events marked the peak in the Roman Empire, the beginning of the rise of the Franks, the attempt to take Rome by the Muslims, and the major defeat of the Muslims by Byzantium making their peak. The Muslims captured Constantinople in 1453. So these events were turning points, but certainly not the end of the world.

Some have argued that Columbus was really Jewish and so they attribute the discovery of America and/or the start of the Spanish Inquisition to the 1493-1494 event. That effectively sent the Jews fleeing to Amsterdam and that is where insurance and the first exchange began trading. This marked the fall of Spain and the rise of the Dutch.

The next 1949-1950 marked the rebirth of Israel and then the 1967-1968 marked the beginning of the Arab war. So this does not appear to be a end of the world marker, but perhaps it will be merely a signal for a change in trend – the fall of the socialistic governments that have become an Oligarchy – by no means Democracies as they try to bullshit us.