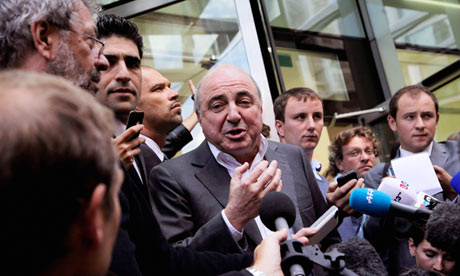 Boris Berezovsky was the Kremlin insider during the days of Boris Yeltsin, who left Russia in the late 1990s after a money-laundering scandal involving Aeroflot airlines and has been the subject of an extradition order by Russia. He has appeared on Moscow’s most wanted list since 2001 on charges of fraud, money-laundering and attempted interference in the Russian political process. A Russian court sentenced Berezovsky in absentia for embezzling $2bn from two major state companies. Moscow has repeatedly requested his extradition although British authorities have not complied.

In 2007, Berezovsky said he had been told to leave England by British police for his own safety after the British security services claimed they had evidence of an assassination plot against him.

The real story has been far more interesting. It has been reasonably alleged that Edmond Safra, Boris Berezovsky, and the RTV1 satellite channel owner Vladimir Gusinsky, had conspired to force Boris Yeltsin to resign before he ran for election in 2000. A fake company was set up in Switzerland to refurbish the Kremlin for $7 billion that was said to have been diverted from IMF loans by Yeltsin. Safra at Republic National Bank ran to the US authorities informing them that a $7 billion money laundering scheme took place and the wire went through the Bank of New York. The Fed in NY City immediately ran in on Bank of New York and charged the brokers involved. Years of stalling took place and the whole thing was swept under the rug.

Even the NY Times tried to trace the money and reported: “In a city where banks sprout like mushrooms, and die just as fast, the money-moving network described in the unfolding Bank of New York case quickly branches into a web of control and ownership. Some strands reach to the highest levels of Russian finance and government.”

At Lucy Edwards’ sentencing where she did no time in prison, the New York Judge just asked who was this $7 billion money laundering deal for, and the reply was a “Russian businessman” and the Judge just said thank you.

Edmond Safra who reported to the Feds about the money laundering was killed about 3 months later. Boris Berezovsky and Vladimir Gusinsky fled as their assets were confiscated with the former going to London and that latter to Israel. The deal was that once Bank of New York was being investigated, the threat was that the true source was Yeltsin and the world would know he took the IMF money. He was informed to resign and appoint Berezovsky as the new head of Russia but Yeltsin turned to Putin who promised to take care of everything. Safra fled Geneva and went to Monaco where he was killed and the others fled Russia. The plot will perhaps become a movie one day after everyone is gone.