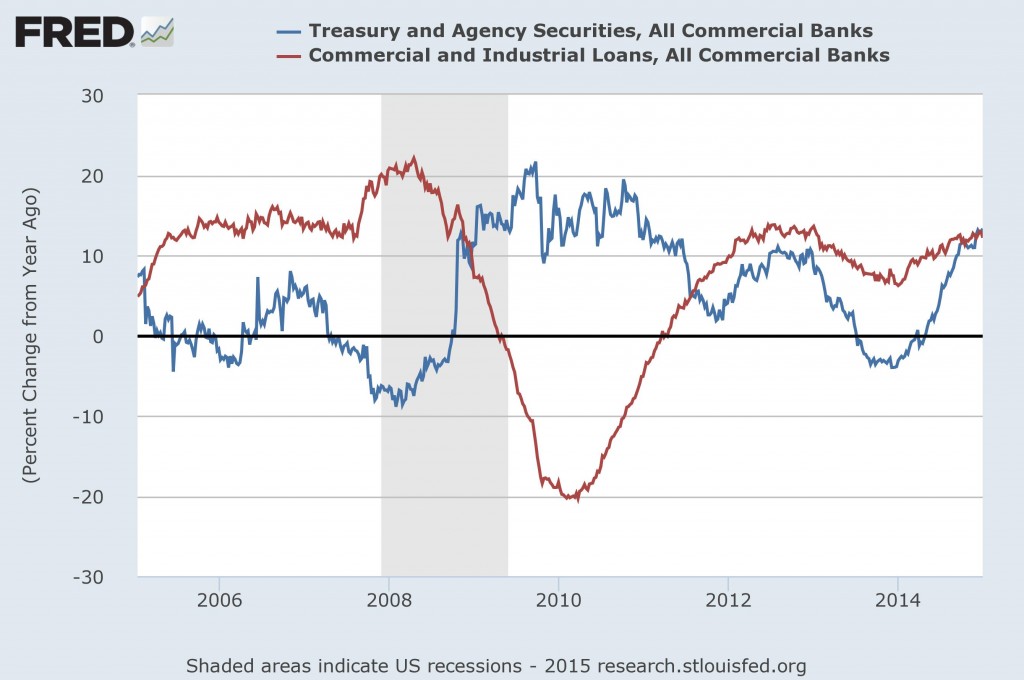 For the first time since 2008, banks are rushing into government Treasuries (PUBLIC) holdings faster than corporate/consumer loans (PRIVATE). Bank portfolio holdings have been a key component in monitoring the shifts between PUBLIC and PRIVATE CONFIDENCE. These shifts from government securities to private holdings within bank portfolios is an important leading indicator of the rise and fall in CONFIDENCE. Normally, this will flip to government  (PUBLIC) when we have a recession and PRIVATE will be on the rise into the peak of the economy. We can see this traditional relationship with the major decline into the bottom of the ECM in 2011.

Look closely now at 2014. Holding of government debt (PUBLIC) is rising rapidly faster than we have ever seen historically during a non-recessionary economic trend. This is CONFIRMING the concentration of capital into PUBLIC paper for the peak in 2015.75. Typically, this should be declining as you would normally be producing a bubble in some PRIVATE aspect within the global economy. To see this relationship flip at this point in the cycle is a very serious confirmation that this bubble will be in government paper not private.

Under a normal business cycle model, loans as a rule are more profitable than Treasuries. Consequently, banks traditionally prefer lending to portfolio investments in government bonds. During the mid-2000s, the above chart shows, bank holdings of Treasury and Agency securities fell marginally while the year-on-year growth rate of commercial and industrial loans soared above 20%.

This PRIVATE to PUBLIC holdings reversed during the Great Recession which is what we call the Flight-to-Quality. This current return to PUBLIC holdings growing faster than PRIVATE for first time since the 2008 crash would normally warn that we are headed into a recession and interest rates would drop with lessor demand and the Fed would lower rates going with the trend trying to “stimulate” a hopeless collapse in CONFIDENCE to inspire borrowing. In this case, there is no huge collapse in the PRIVATE holdings, just the PUBLIC are now exceeding PRIVATE. This is a reflection more of a bubble in PUBLIC debt.

When we turn to consumer activity, we see that they increased their borrowing in February reaching a record high. A closer look reveals yet another trend shift. The record high in consumer loans has been driven by a large jump in auto and student loans. The drop in oil prices and the harsh winters has resulted in more car sales and students keep turning to education praying that more degrees will make them employable which has failed to work as 60% of college grads cannot find employment in the field of their degree. The Federal Reserve reports that consumer borrowing expanded $15.5 billion in February following a $10.8 billion gain in January. The February increase pushed borrowing to a fresh record of $3.34 trillion, but it is just not exactly as it may seem.

Nevertheless, while on the surface one would say consumer loans are at record highs, looking closely reveals that car and student loans combined have offset a second monthly decline in credit card borrowing. This is showing a weaker trend than the numbers would otherwise suggest. This is deeply concerning for the peak in the economy for this wave is indeed a dead-cat-bounce – very shallow recovery.

Banks have been reducing their dealing lines. They can no longer manipulate markets as easily as they once did for quick plays in interest rates and commodities (except you know who), and this is also reflected in the sharp rising in PUBLIC paper holdings. As liquidity collapses, the other side of 2015.75 is starting to appear EXTREMELY DANGEROUS for a collapse in CONFIDENCE will cause steeper flash crash than at any point in recent history. Dealing lines being cut in London and New York is reflecting this sharp drop in liquidity and the increase in volatility.

« How Absurd – Banks Should Not Lend More than Liquidating Value of an Asset?
2015 World Economic Conference Nov 7/8 Princeton, NJ »