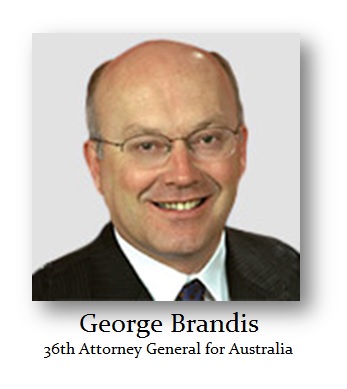 George Brandis, the 36th Attorney General for Australia, penned an article that Snowden is a Traitor and the more leaks he reads the more nut-job conservative he becomes. I should point out these VERY SAME arguments were once used several decades ago by another politician who envisioned himself as defender of his nation. He called them financial traitors motivated by greed who were exploiting the people and foreign enemies of the state threatened its security. Just replace the words with what these people government calls a “terrorist” today who is anyone that disagrees with the government’s views and objectives.

People like Brandis are exceptionally dangerous for these are the type of people who destroy civilization in the name of protecting it. They are biased, prejudiced, and can never be trusted for in their zeal they tear apart the very fabric that binds us together. To them, everyone is a suspect and trust nobody.

That politician who also saw the bankers as financial terrorists decades ago during the Great Depression that had threatened the nation, set out to right what he saw as the wrongs as well. The banker were never financial terrorists – that was fiscal mismanagement of politicians they normally blame the bankers for. This politician justified his actions cloaking them in fiery speeches. Even the ideological enemies of this politician today will admit that he was a highly gifted and prolific speaker who could move people and cause them to cheer for his nationalistic policies. Indeed, the undertone of his motivating speeches was the core of popularity – that they were the victim of dark forces. One of his more famous speeches began:

MORE than fourteen years have passed since the unhappy day when the German people, blinded by promises from foes at home and abroad, lost touch with honor and freedom, thereby losing all. Since that day of treachery, the Almighty has withheld his blessing from our people. Dissension and hatred descended upon us. With profound distress millions of the best German men and women from all walks of life have seen the unity of the nation vanishing away, dissolving in a confusion of political and personal opinions, economic interests, and ideological differences. Since that day, as so often in the past, Germany has presented a picture of heartbreaking disunity. We never received the equality and fraternity we had been promised, and we lost our liberty to boot. For when our nation lost its political place in the world, it soon lost its unity of spirit and will….

That politician was Adolf Hitler and the financial terrorists were the Jewish bankers. There are those who will be offended by even mentioning Hitler. Caution! If you do not know how Hitler came to power as an ELECTED official not by military coup, then you will not recognize the same warning signs when the next politician pulls the same heart-strings. History repeats BECAUSE human nature NEVER CHANGES.

Beware people who call Snowden a Traitor for they are extremely dangerous. They see whatever they do personally as just even when they tear down all rights because they answer to a GREATER good. They are blinded by their self-interest as part of the government mechanism whose sole goal is to retain power and justify that end by any means. They see the government as the sovereign – never the people who compose the nation. In their deranged grandeur, any threat even by the people against government is treason. They have forgotten – they are public servants, not the other way around.

Treason CAN NEVER BE someone exposing the corruption and illegal activity within government because government is not the sovereign – the people are. So in reality, they are telling their boss an employee is stealing. You would lock up the thief, not the person who informed you. Brandis has this whole thing ass backwards.