QUESTION: Marty; Have you got your Asset Allocation models up and running? We would like to come to the Conference if you will be doing what you use to do for us years ago. It is a long trip from the Middle East as you know. 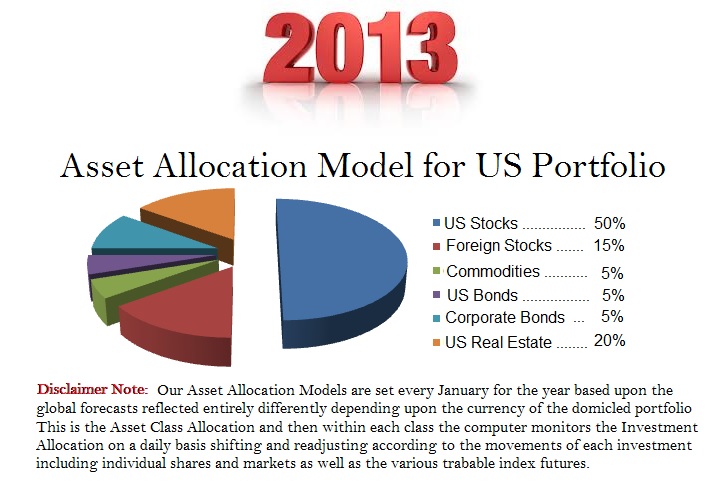 ANSWER: Yes. The Asset Allocation Model is up at last on the primary level. I have been working hard to add new things I also wanted to do but did not have the time for. But generally, the WEC conference will include the Asset Allocation for 2014 at the primary level. Here is the picture of 2013’s forecast and you can see why the forecast was for a drop in gold and new highs in equities with a rally back in real estate. Everything worked out perfectly for 2013. Looking ahead at 2014, this will be a very interesting year.

The Global Market Watch has been expanded dramatically. To catch up on the last 15 years, I used an induction method to expand the pattern recognition. The Reversal System has also been expanded and altered. Instead of a flat model, this has been expanded into a dynamic model mapping all major currencies and focusing them back to the domestic currency. In this manner a buy or sell signal will reflect the global trend not just domestic. This reduces the amount of counter trend reaction before follow-through.

My dream of creating the Reversal System on Openings is also near completion. It is being back tested now. I have for years tried to apply the formulae for closings to the openings without success.Why the two should have different forces is still bewildering to me in all honesty. But I am merely the explorer and must accept what the markets dictate. The way this is being designed to work will be based upon a higher or lower opening. From there we will derive the buy or sell signal rather than just waiting for the closing. There also appears to be a cycle emerging between the two. This seems to target wild outside reversals and flash crashes. The further into this 51.6 year Wave that peaks in 2032, the greater the volatility. As a result, this divergence between the opening and closing is quite interesting for it is just now coming to light as the volatility rises.