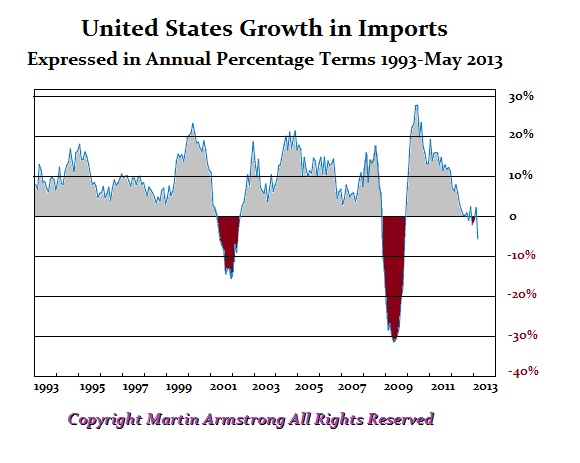 Obama and the Democrats have to get through their thick skull that Karl Marx’s ideas are dead. The Collapse of Communism proved that and now it is their turn with socialism that really is the same thing – the people are incapable to spending their own money so government should do it for them. Government is infested with lawyers – not economists. Leave the world alone and it would be a better place. Here is the picture worth a thousand words. It is the growth in US imports between 1993 and May 2013. When it turns red, we head into recession. When you raise taxes, you reduce the spending of individuals, and that is reflected in the declining imports. Why do you think China is starting to turn down? Why do you think Europe will belly-flop into a deep depression?

The PEOPLE are better at spending their own money than government where most goes out the back-door in corruption anyway. Raising US taxes will produce yet another nail in the coffin of the global economy but these lawyers in Congress and the White House are arrogant suckers. You cannot tell them anything. So we must crash and burn. It is part of the cycle of change. Smith called it the “highest impertinence”.

« What Should the Next Fed Chairman Do?
China Allows Snowden to Leave Hong Kong & seek asylum in Ecuador »