COMMENT:  “You should stop this anti-union propaganda nonsense. Before unions, children used to work in dangerous factories at 12 years old and their fathers died at 30 from cancer if they had the chance not to get crushed by the machines themselves. Before unions, life wasn’t better:

if was far worse. You should stop the propaganda right now. You should look at History and see how people lived before unions. It was a miserable life. And you can’t say now that people are more happy without unions; nobody is happier working for half the wage and living in a slump. Please look at yourself in a mirror and be honest with your readers.”

REPLY: It does not matter if it is government or unions. Everything is cyclical and it continually moves for greater and greater power. Unions began because as the industrial revolution evolved, working conditions in factories were unknown since people never worked in factories. There had to be several tragedies that gave birth to unions for just causes. People died as the Industrial Revolution developed. 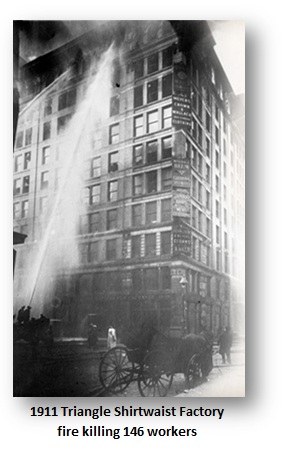 On March 25th, 1911, a fire broke out at the Triangle Shirtwaist Factory in New York City. The employer had locked the doors to ensure the workers could not leave early unnoticed since they were paid hourly. However, when the fire broke out, this policy created a death trap. Within 18 minutes, 146 people died. This certainly was a profound tragedy that contributed greatly to the trend toward safe working conditions legally.

But unions, like small government, once formed for one purpose, quickly kept expanding looking for things to do. They pushed wages higher and then payroll taxes were added in 1937 starting at 2% and are now 12.4% to pay for socialism. That further increased the COST of labor and illustrates the point that unions or government continually expand their domain of power. Unions may have begun about working conditions but they moved into demanding higher wages fixed ignoring the economy, business cycle, or international competitiveness.

I had an old school friend who was a staunch union guy out of work in the ’70s because his Steam Fitters Union priced itself too high and then there was the crash of 1973-1975. Unions will NEVER lower wages to move in sync with the economy and thus they increase unemployment. In this wages are “sticky” and do not rise and fall with the economy. Yet at the same time while clinging to unions, when he shopped, he bought the best deal that was non-union or imported goods.

Foreign cars took a lion share of the market with the Germans doing quality and the Japanese providing price. The American quality declined as unions inspired confrontation and the Japanese were able to undercut American prices with higher productivity. They would never have gotten off the ground had it not been for the confrontations with unions. The demands for pensions wiped out jobs as it is sending the cost of government through the roof and causing municipal government to collapse as is the case in Detroit where about 50% of taxes go to pay pensions not services.

The workers in the United States Japanese plants who were non-union came from Detroit unions. They did well because the Japanese had a cord that any worker could pull to stop the assembly production if there was something wrong. They placed in the hands of that worker the same power to shut the plant down for a POSITIVE reason where as that power in the hands of unions became DESTRUCTIVE. The issue was NOT that Americans were lazy – it was the union to justify their dues and high salaries extracted unreasonable concessions and reduced productivity – remember Jimmy Hoffa? The unions often became criminal organizations. Their demands were so absurd in New York that no shipping goes there any more because the unions chased the jobs out. That is a fact of life.

The original purpose of the unions was to safeguard workers and working conditions. But this has been surpassed by law making unions irrelevant in those areas. Now it is all about extracting higher wages for the same job and reducing productivity.