All Empires Die By Deflation – Not Inflation

A lot of people have asked what to do because property taxes keep rising and they can see they are unable to retire under such circumstances. The politicians are wiping out the elderly diminishing their savings and exploiting them in every way. There are no exceptions for taxation when you sell your home as there are in Britain. You pay no tax on the profits from a primary residence there. In the USA, you are taxed until you die. and then they want what is left.

Property taxes are the worst of all taxes for they prevent you from really owning your home. Can’t pay the tax – they take it and sell it for pennies on the dollar. You have to pay taxes as if you were still working so all you can do is sell and move south and then pay taxes on your gains. New Jersey even put in an exit tax on the people it has been forcing to leave. California has been hunting former residents who moved demanding taxes on pensions claiming they earned it when living in that state. It is a wonder why we do not yet have a sea of grey hair people with guns and pitchforks storming Washington yet. 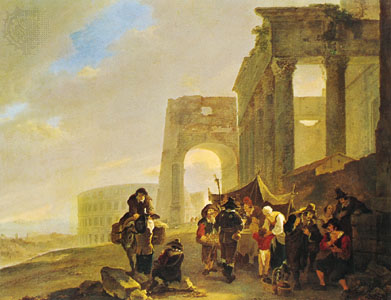 This is how empires die. Taxes in Rome kept rising. Its population peaked about 180AD and as corruption began to rise, people began to leave. The higher the taxes, the more people left town. Eventually, people could not afford the taxes and were forced to just abandon their homes. This is the death-spiral of empires. They consume all wealth until none is left. Indeed, Ben Franklin got it right – our fate is always doomed by death and taxes.

By the Middle Ages, the Roman Forum, was the grazing grounds for animals. Edward Gibbon wrote the best epitaph: