The Face of Real Evil

One reader commented “A country with 6% of the Worlds population but Houses 25% of the Total Prison Population.” Yes, only 4% of the people in prison are violent. There are people there for shooting a moose on the Federal property without a permit. The number of doctors and lawyers in prison is shocking.  Jail time is mandatory for every federal offense or the prosecutor gets no credit in his career. The USA will eventually have its Bastille Day. That is simply how history repeats.

It was Henry VII (b: 1457; King 1485-1509) who seized the crown in 1485 establishing the House of Tudor where he used the courts to further his power. The ruthlessness of English justice began to emerge at that time. To strengthen his central government, he reorganized the justice system installing trusted local justices who served at the pleasure of the king. He gave effectively unlimited power to these new pretended justices and he established new prerogative courts which no man, regardless of his wealth or stature, could overawe. His conviction rate soared to about 90% (below ours at 99%). He made juries more frightened of having to explain their conduct of acquitting defendants be he a noted landowner or a common subject. Convictions rose dramatically during the first half of the 16th century according to the celebrated historian Charles Hibbert, the Roots of Evil, (1963, p21)

Then there was Bloody Mary. The Act of Supremacy of 1534 was followed in 1539 by the Act of Six Articles which authorized the death penalty for anyone who denied the doctrine of Transubstantiation or clerical celibacy. A man in England could be hanged for eating meat on a Friday or burned to death for denying the holiness of relics. Heresy and Treason were blended into effectively a single crime. Men and women were turned into criminals by fanaticism and torture and then punished with such inhuman ferocity it was incomprehensible. Hibbert tells us of a boy of fifteen who was put to death by burning alive “for repeating words the meaning of which it is difficult to believe he understood” (p23). The heresy laws put into execution by Mary I (b 1516, 1553–1558) were based upon her misguided passion that she was working for God managed to keep fires burning for four years during her reign.

Hibbert pointed out a Jesuit missionary was put to death at Tyburn in 1581 under a proclamation that he was being punished for “treason” and not for a religion that was read out in the Queen’s name. Prosecutors could always find one law to take someone’s life to pretend his judicial murder was in accordance with law and justice (p23). They are still doing the same thing today.  The Occupy Wall Street crowd were never arrested for what the “said” but they walked on the grass or had no permit.

The United States has engaged in torture of both citizens as well as suspected terrorists. They threaten people and their families with life imprisonment unless they confess to whatever they write down.

“The use of torture, although still not recognized by Common Law, was now often used in criminal trials of this sort after a warrant had been obtained from the Council and may well have been used without a warrant. Its use was not unknown before the Tudor period. Prisoners could legally be tortured by licence of the King at least as early as the reign of Henry II. The rack was in the Tower by the time of Henry VI and by the following century the Scavenger’s Daughter-a device which crushed the body until the blood spurted out of the nostrils and the tips of the fingers instead of stretching it ‘until the bones and joints were almost plucked asunder’-was also in common and authorized use.”

And Chief Justice Lord Edward Coke (1552–1634), himself, who is regarded as the greatest jurist of the era, took the position:

“like the medieval bishops before him, could find biblical authority for the ‘godly butchery’ of the punishment inflicted on traitors, even for the dismemberment of their genitals which was sometimes added to the disemboweling and decapitation as an aggravated humiliation. Some of the more painful and degrading parts of the sentence of hanging, drawing and quartering were omitted or commuted in later years but as late as 1817 at a public execution of three peasants convicted of high treason at Derby, decapitation followed hanging.”

The cruelty of these people acting in the name of God to justify their actions led to mutilation and cutting people apart while still alive. Hibbert wrote in his Roots of Evil (p26):

“In the sixteenth century, the sentence of the court was normally followed Exactly. The man was cut down from the gallows while still alive and often sometimes even survived disembowelment. CoIIingbourne, who was executed for a libel on Richard III, lived long enough to cry, ‘Oh, Jesus, Jesus’ as the executioner, having quickly disembowelled him, cut open his chest to take out the heart and hold it up so that the crowd could ‘behold the heart of a traitor’ before beholding the traitor’s severed head.” And another man, after watching the quartering of his uncle, cried out ‘Oh, Lord! Lord! Have mercy upon me!’ as the executioner took out his bowels.” 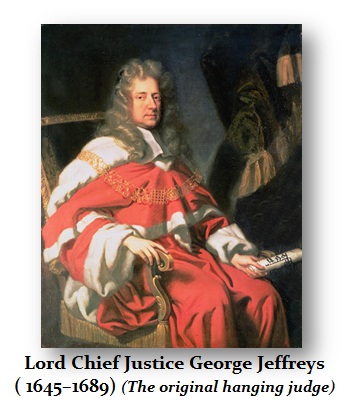 It was Lord Chief Justice George Jeffreys, 1st Baron Jeffreys of Wem, (1645–1689), who was the man that inspired the English Bill of Rights in 1689 and the insertion of the Cruel and Unusual Punishment Clause that became the Eighth Amendment in the United States and is once again ignored by the American Judiciary. He is best known for the “Bloody Assizes.” Jeffreys created judicial murder routinely and took pleasure in doing so. He issued harsh sentences to nearly all defendants and in a protest against taxation and abuse of government, he ordered about 300 to be executed, and between 800 and 900 he ordered to be transported to the West Indies as convict labor. On September 18-19th, 1685, Jeffreys alone sentenced 144 people to death earning him the notorious nickname “the hanging judge.”

Charles Hibbert quotes from one of the court transcripts on Christmas Day no less when Jeffreys ordered:

“Hangman, I charge you to pay particular attention to this lady. Scourge her soundly, man; scourge her till her blood runs down! It is Christmas, a cold time for madam to strip. See that you warm her shoulders thoroughly.”

The British legal system was so corrupt anyone for the slightest offense even stealing an apple you were arrested and sold into Indentured servitude, all to profit the government. As Hibbert reported the sentence imposed read:

It was the American Revolution that stopped the criminal-labor trade as it then shifted to Australia and the shortage of labor on plantations was filled by the Dutch bringing in African slaves.

The collapse in the rule of law and the abuse of using the rule of law for political purposes has plagued society forever. Unless it is restrained, there will never be any liberty or security. Charles Dickens wrote about how corrupt the courts were in Bleak House in 1859. He began in his first chapter on Chancery:

“This is the Court of Chancery, which has its decaying houses and its blighted lands in every shire, which has its worn-out lunatic in every madhouse and its dead in every churchyard, which has its ruined suitor with his slipshod heels and threadbare dress borrowing and begging through the round of every man’s acquaintance, which gives to monied might the means abundantly of wearying out the right, which so exhausts finances, patience, courage, hope, so overthrows the brain and breaks the heart, that there is not an honourable man among its practitioners who would not give—who does not often give—the warning, ‘Suffer any wrong that can be done you rather than come here!'”

« Yes it is True
Egypt Near Collapse – Part of the Cycle? »