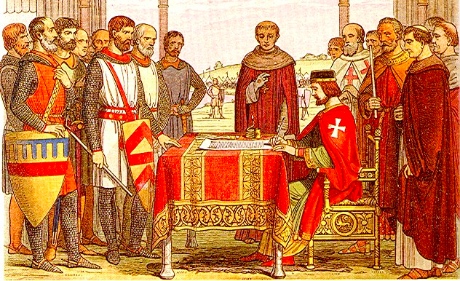 It is the 800th year anniversary of the Magna Carta. Here are a few interesting clauses that would be nice if they were reinstated once again.

* (11) If a man dies owing money to Jews, his wife may have her dower and pay nothing towards the debt from it. If he leaves children that are under age, their needs may also be provided for on a scale appropriate to the size of his holding of lands. The debt is to be paid out of the residue, reserving the service due to his feudal lords. Debts owed to persons other than Jews are to be dealt with similarly.

(39) No free man shall be seized or imprisoned, or stripped of his rights or possessions, or outlawed or exiled, or deprived of his standing in any other way, nor will we proceed with force against him, or send others to do so, except by the lawful judgement of his equals or by the law of the land.

(41) All merchants may enter or leave England unharmed and without fear, and may stay or travel within it, by land or water, for purposes of trade, free from all illegal exactions, in accordance with ancient and lawful customs. This, however, does not apply in time of war to merchants from a country that is at war with us. Any such merchants found in our country at the outbreak of war shall be detained without injury to their persons or property, until we or our chief justice have discovered how our own merchants are being treated in the country at war with us. If our own merchants are safe they shall be safe too.