2013 August 7th What Was it? Nothing or a Watershed Shift?

I have been reading almost all of your writings in the past 4-5 years.  I just wanted to clarify or dig a little bit deeper on your blog post today for the Dow and the ECM.  You noted that we must wait until the bottom of the ECM in September this year before we have a better idea of when the phase transition in the Dow might occur.  I know that the 1987 crash occurred on the “minor” top or turning point in the ECM.  However, as you noted that was not the final top and the market rallied significantly into 1989.  However, I don’t know of any major markets that may have topped at the last peak (2013.6).  Is this indicative of the markets starting an inversion process?  If so, are you looking to see if the DOW continues to meander higher into September this year and then put a short-term top in place and declines into 2015.75.  This would mark an important bottom and confirm the cycle inversion, correct?  The other option, would be a correction now into September 3/4th and then see the phase transition top into 2015.75.  It seems that there is not enough time for Europe, Russia, and other capital to panic into the US in the next 1.5 years.

ANSWER:  August 7th was critical from a global perspective. It marked a shift in trend internationally. For example, in gold we have a double bottom in dollars June and December 2013. However, when plotted in a basket of currencies, that is only a dollar illusion. Like the 1987 Crash, dollar based investors were confused as foreign investors sold.

There were numerous shifts that took place. The week of August 5th started the correction. The high formed the week before (07/29) and that target week (08/05) started with a Directional Change. However, that was more important than meets the eye. I noted there was a shift where the S&P500 took the lead displacing the Dow as the leader after August 7th. This was rather significant because it illustrated the rally was then taking on a broader context. August 7th would not be a Phase Transition high as in 1987 for the currencies were moving opposite to that event providing the underlying support for a continued rally. The S&P500 cash took out the high made the week of 07/29 the week of 10/14. The Dow closed above that high of the week of 07/29 on a weekly basis the week of 11/04. This demonstrates that how the S&P began to shift and take the lead after August 7th whereas it was the follower all the way up out of 2011. 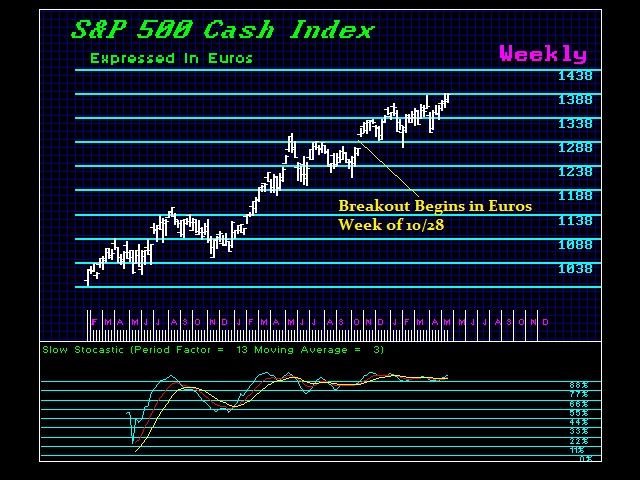 Keep in mind that this is a global model – not a one-dimensional system exclusively in dollars or based upon personal opinion. The breakout began the week of 10/28 in Euros. This is important to grasp for the computer is monitoring absolutely everything in every currency. This is a massive analysis unmatched by anything out there ever.

Furthermore, the 7th of August has been an interesting day historically. In 1945 the Japanese imperial headquarters stated a few new type bombs had been dropped, causing considerable damage. The US confirmed it was a single bomb which later is confirmed to have destroyed 60 percent of the City of Hiroshima including practically all living things, all human and animal life was burned to death by the tremendous heat and pressure engendered by the blast. In 1964, August 7th was the Gulf of Tonkin Resolution passage that began the Vietnam war. However, August 7th, 2013 was very interesting to say the least and it was the first indication the Cycle Inversion was beginning, albeit in slow motion. OBAMA URGED CONGRESS TO END FANNIE MAE AND FREDDIE MAC, on August 7th, 2013. Obama called on Congress to wind down government-backed Fannie Mae and Freddie Mac agencies. Obama also unveiled a strategy that would ultimately place the mortgage finance system more in the hands of the private sector than in the government’s. [NBC News]. Therefore, August 7th began the shift toward going after the bankers.

DOJ SUED BANK OF AMERICA August 7th. The Justice Department sued Bank of America accusing the bank of defrauding investors by vastly understating the risks of the mortgages backing some $850 million in securities. The lawsuit adds to the hefty legal burden of the bank, which has been badly battered by mortgage-related losses and litigation since the financial crisis. [The New York Times]. This began the shift to start going after the banks on the part of the DOJ itself, This marked a significant change in trend. That model turned February 24th. August 7th marked the actual day it began with Bank of America.

The oscillators are at the upper end over 90. This is warning that we are getting close to a correction where the talking heads will all come out and proclaim they were right.  This does warn that we can get a June high with a low in the fall and then a rally into 2016. As long as the market does not go into a Phase Transition and peaks by October 1st, 2015, then we should be in good shape for a broader continued rally.

With the yearly model on the US share market NOT lining up with 2015.75, it appears at this time that we are more likely going to deal with a major long-term advance.  The 2016 target will be 31.4 years from the start of the breakout with this new Private Wave – 1985. Therefore, we do have the potential for that Phase Transition. If we then back off into a low for 2020, then a full-blown 13 year rally may unfold and that will take us into the final high in 2032.95.

It does not appear at this time that we are headed into an all-time high for 2016. The primary crisis we must face is the Sovereign Debt Crisis and that alone will cause a massive capital flight into the private sector. That came at the end of the last Private Wave that peaked in 1929.75 and unfolded in 1931. However, the capital flows anticipating that default began to shift in 1927. That is what set in motion the first attempt by central banks to deflect the capital inflows by lowering interest rates in the USA. Domestically, people blamed the Fed for creating that bubble. This was not fair because the capital flows were pouring into the USA in any event. Nevertheless, the typical interpretation was only domestic and they argued the Fed was deliberately trying to create inflation, which was rather absurd. The boom into 1929 was caused by capital inflows, not lower interest rates since rates collapsed after 1929 from 6% to 1% with no impact upon saving the market. From this event it was 4.3 years until the Sovereign Debt Crisis of 1931. That was precisely half a 8.6 years cycle.

There are always trends within trends. The world economy is very much like an onion. Layer upon layer of activity comes together to form the whole onion. It is never just a single event.

« Global Market Watch for May 22nd, 2014
Income Tax Revenues Collapsing in the States »