Summers & Why Economics Refuses to Forecast

Regarding the brief clip of Larry Summer’s opining on why economic declines are hard to predict, I was struck by the 2nd part of his explanation, which seemed to me to indicate that economists would not want to forecast a decline (even if they could) because it would set expectations of a decline and become sort of a “self fulfilling prophecy” because people might hunker down anticipating a recession and thus bringing it on or making it worse.

In other words, they need to keep CONFIDENCE so they will never forecast a downturn of the business cycle.  This is like why Stalin executed Kondratiev b/c he recognized cycles and the governments inability to regulate them.   Do you think Summers realized what he was actually communicating?

Thanks for sharing your knowledge – it has opened my eyes wide.
G

ANSWER: Clearly, economists know that CONFIDENCE is the game, and so do politicians. When French TV played my interview and questioned Sapin, the Finance Minister, his response was that this was not helping to maintain CONFIDENCE. You can see the same attitude. I do not believe that Summers can forecast anything for there has been no attempt to do so. Traditional economics shun any such attempt to forecast the economic turns. They only forecast if the trend in motion would remain in motion.

When I testified before Congress, they made me the last to speak on the panel because everyone else was an academic. They apologized for having to place me on such a panel. When asked what would happen to the dollar if the tax rate changed, each person before me said it would have no impact. By the time I was finished testifying, the other people on the panel slammed the doors as they walked out because they looked like fools. The questioning focused on me and the academics were there just for show.

When the government/Goldman Sach’s Alan Cohen tried to shut us down to prevent us from doing any forecasting, the same attitude prevailed that we had too much influence. The Department of Energy came to us in 1999 and asked us to provide a model for them because of our forecast that oil would rise from $10 to $100 by 2007 — it closed that year at $98. 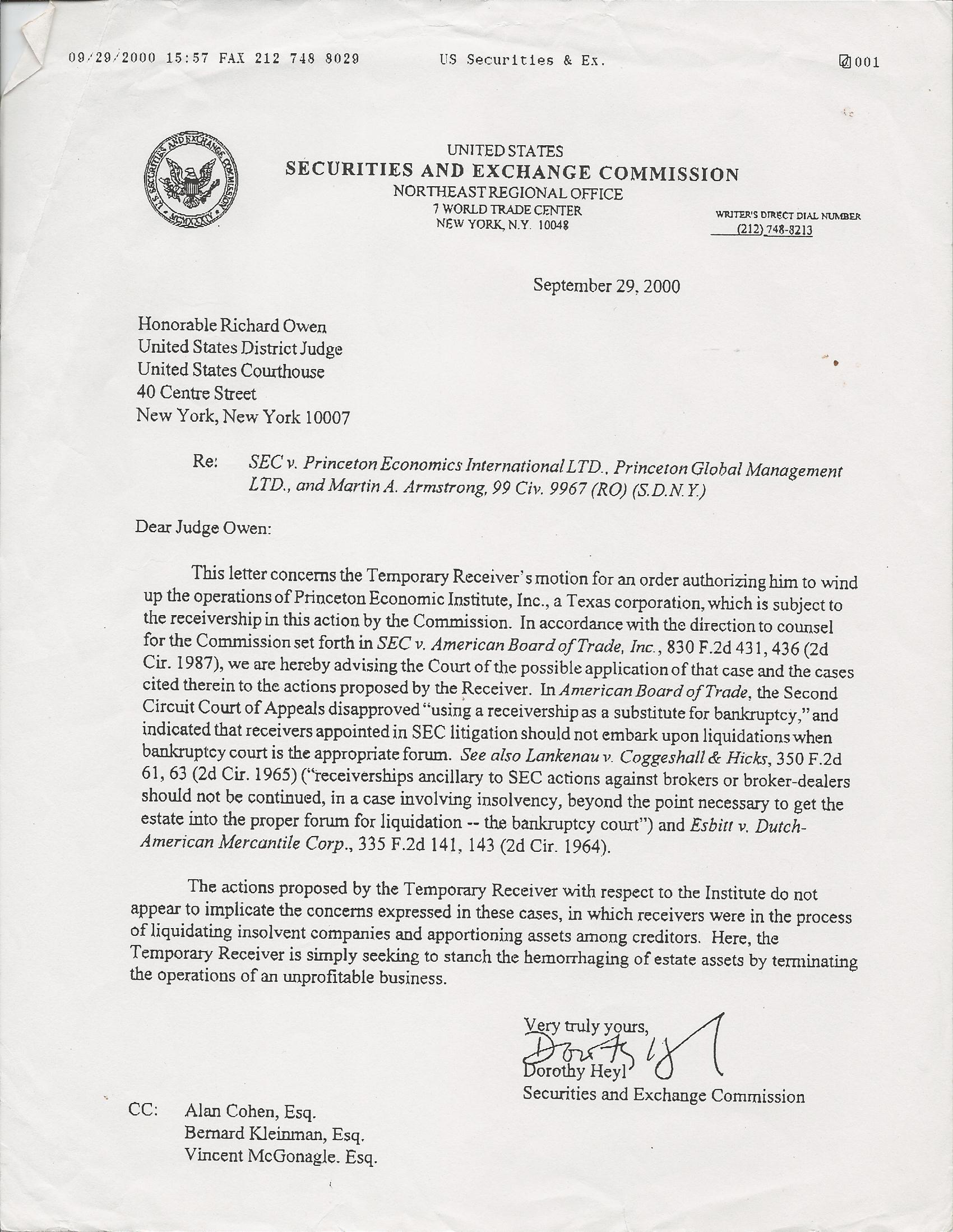 There was a hearing on October 3, 2000. Alan Cohen of Goldman Sachs insisted that PEI be shutdown. The SEC even said the company was not insolvent, which should have allow us to have the case moved to the Bankruptcy Court to get rid of Goldman Sachs and that judge. They knew they would lose control of the case if that happened. So the SEC sent a letter stating PEI was not insolvent so the case should continue.

Jim Smith, a staff member, came to testify on October 3, 2000 with a written request from the Department of Energy for us to create a model given our forecast for $100 by 2007. Alan Cohen objected and Judge Owen would not even allow Jim Smith to testify. Nothing could be done after the court forbid any employee from testifying. Federal court is just a dog and pony show. There is no Constitution and there were no rights respected of any employee.

The second part of Summers’ statement was precisely what they argued against me in court, that I “manipulated the world economy” because our model had correctly called the turning points. To them, it was not the model. It was influence. If you assume it is impossible to forecast, then the only other conclusion is influence from a self-fulfilling prophecy.

So there is really little hope of ever turning the economic community into actual forecasters. It was Wesley Mitchel who did not understand cyclical wave structure, and as a result, declared that the business cycle was not regular and could not be predicted, which removed that as a viable avenue for research. So economists, to this day, remain unable to understand how to forecast the business cycle and assume it is a pointless endeavor, kind of like the old belief that the world was flat because you could not possibly stand upside down on a ball.

Hence, the second part of Summers’ statement is all about “influence” and the name of the game is precisely as Sapin complained to the French TV — this does not maintain CONFIDENCE. Consequently, economists forecast +-2% from the current trend, NEVER turning points, and they are like the gold promoters who only ever say BUY. They think if you only say UP, UP, and AWAY, then “influence” wins. Sorry —that is total bullshit. They simply become witch doctors with an even worse track record.