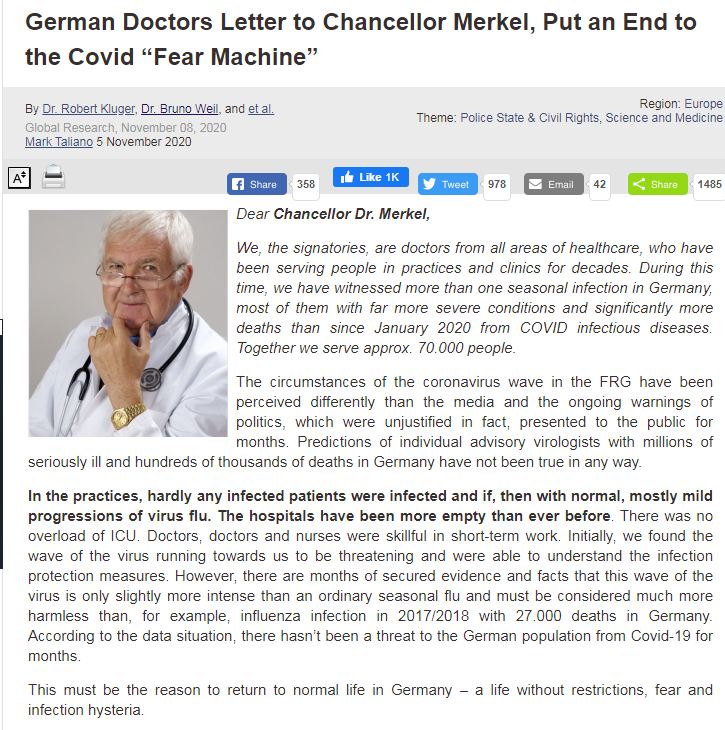 Here in Germany, many more doctors are rising up against this COVID  pandemic. They have written to Merkel, but she does not listen. I am starting to think you are right. She has been bribed.

REPLY #1: This just makes no sense. She has put even the German car industry in jeopardy. I believe she has joined Schwab and there is no other explanation as to why politicians would deliberately refuse to listen to so many doctors from around the world that state this is not a pandemic.

There is clearly another agenda and it is being pushed from the World Economic Forum.

Have you already heard about the new mutated Corona virus! Here in Denmark farmers are forced to urgently kill all their minks, they used for furs! Was told by a nurse, these animals carry and spread a more aggressive version of the virus!!!
I know you predicted that possibility, but not that early i guess.
Thank you for all your efforts
Best regards
EZ

REPLY #2:  Viruses will always mutate which is why the flu shot is different every year. The question really is very clear. The common cold is a Coronavirus. Is this really a mutation of this virus that appears to have been manufactured in a lab or is it something completely different? I suspect it has nothing to do with COVID-19 and is simply another Coronavirus that they can use to keep people terrorized.

QUESTION #3: Hi Marty,
I’ve been reading a lot of climate studies lately, and as someone who has generally trusted the scientific consensus, I was quite surprised to find how unscientific the anthropogenic theory is. It seems to be an assumption more than anything, as very few scientists seem to be investigating other possibilities. I spent a couple of years in university studying biology before I realized what a waste of money it all was. During my time there I developed a suspicion that much of modern science is driven by confirmation bias, and this, unfortunately, seems to add fuel to that fire.

Although I did not find anything conclusive in my research to confirm this hypothesis, it seems as though we are headed into a period of global cooling. During the cooling in the 70s, Atlantic Multidecadal and Pacific Decadal oscillating waves were in sync, rather briefly in the grand scheme of climate cycles, while moving downwards. This is projected to occur in the next 10 years. In addition, solar induction cycles seem to indicate we are due for the end of this interglacial, and both Antarctic sea ice, as well as the Jacobshavn glacier recently, are growing. I have noticed that this corroborates Socrates’ prediction of a major economic contraction in the near future. Economic contractions historically seem to occur during times of global cooling, although I have not dismissed the possibility that this is a coincidence.

Are you or Socrates able to provide any insight into this phenomenon? I have not been able to locate much information, any you are able to share would be greatly appreciated.
Thank you,
HK

REPLY #3: Yes, this is very clear in economic analysis. Take Thomas Picketty and Klaus Schwab. They are really Marxists at heart. Therefore, all their research begins with a predetermined conclusion. The same is indeed taking place in climate change. Confirmation bias takes place from the direct influence of desire on beliefs. Julius Caesar even said back then that people believe what they want to believe. When people would like a certain idea or concept to be true, they end up believing it to be true. They are motivated by wishful thinking. This error leads the individual to stop gathering information when the evidence gathered so far confirms the views or prejudices one would like to be true. Even this manufactured pandemic. They have been putting in the new how many cases rising dramatically, but not the deaths. They have so terrorized people they simply believe what they want to believe.

They know this basic principle so they use it against the people. This is why there will NEVER be a return to normal. The multitude of the sheep will no longer shake hands, keep their distance, and look at everyone as some sort of threat.

QUESTION #4: Hello Mr. Armstrong
I thought recently about cycles. It depends on human nature and how we react to various circumstances. The recent events made me think if the speed of spreading the information affects the cycles, specifically the frequency. I mean the frequency should increase since more people can be affected by positive or negative information coming from the world. Eastern Europe had almost 50 years of trying to bring communism upon them. I don’t believe that it will take that long until they fail this time in internet times.
Much of good health
LM

REPLY #4: You are mixing two interesting aspects. The spread of information really remains the same. Rome overthrew its king in 509BC and Athens its tyrants in 508BC. The spread of information may seem to have increased because of TV, but it still takes time to filter into the population which seems to be about 6 months before everyone truly knows of some external event.

The second part is what we call the Revolutionary Cycle which is 86 years and does follow the 8.6-year frequency of the ECM. That is entirely different from the movement of information. It appears that the first generation acquiesces. The next becomes more subversive but they complain. The third generation seems to be the one that takes up arms. This is why I call this Communism 3.0. It is the third attempt to subjugate the world to this philosophy of tyranny.

I still can’t grasp how these so called Western governments could have all conspired to enact the lockdown, maintain it and then continue practicing it on their people.

How could this have happened? It’s not enough to say they were bought off. The question is WHY? Why Germany now? Britain? Italy, Canada, New Zealand and Australia?

Was it the failure of their central banks where they realized they could no longer borrow and did not want to tell the truth to their own people cuts in government spending had to follow? This seems rather absurd.

You have stated they were bought off….why would they agree to this? It makes no sense. To what end…imprisoning their own people? You have suggested this is the collapse of socialism in the west. But are all these people running these governments socialist?

We know about the democrats here. But why would they turn over all sovereignty to the UN and merge interests with Europe?

Why the betrayal…it cant just be about failure of central banks and deficit spending?

REPLY #5: The basic underlying incentive is the collapse in Socialism. Even since the ECB lower rates to negative in 2014, every effort to stimulate the economy by creating money has failed. They have reached the point of no return. They have been bombarded by those pushing for socialism using Modern Monetary Theory to just print money for there will never be inflation looking at the 2014-2020 period.

They also know that pensions are collapsing. More than 50% of the municipalities are insolvent. They cannot meet the pension obligations to state employees. I have been pushing to eliminate debt, curtail government spending to 5% of GDP, let the outstanding debt become perpetual bonds paying 3% and this we retain our freedom. They fear that state workers will realize they have nothing and then the entire government collapses.

In walked Klaus Schwab preaching communism as the solution. Default on all debt and turn to Guaranteed Basic Income.

Some have been bribed and others just follow their lead. This is actually the collapse of government socialism as we have known it.