QUESTION: Hey Martin – I love the insights you have and Socrates seems to be spot on about most things. It’s just hard to read your blog posts. It seems like we all will have no choice but to submit to Communism 3.0. How do we fight this? You say they will lose in the end. How can we help bring that about? We all need a little hope out here. Is there anything we can do to hasten Gates/Schwab/Soros’ demise?

ANSWER: The future certainly looks very dark. Let us hope it is darkest before the storm. We in the United States perhaps have the best resources to resist. Yes, crime is soaring because they have destroyed the economy. Gun permits are the #1 commodity right now. They have been using the universities to sell their agenda for the last decade. I would seriously refuse to pay for any education that is on the list of the World Economic Forum.

What we can do is look at the American Revolution as a guide. Thomas Paine’s most famous pamphlet, “Common Sense,” was first published on January 10th, 1776, selling out its thousand printed copies immediately. By the end of that year, 150,000 copies were distributed which was an enormous amount for that time. It is believed that about 33% of the population were in favor of the revolution. It was Paine’s Common Sense which is credited as playing a crucial role in convincing colonists to take up arms against England. While Paine argued that representational government was superior to a monarchy or various forms of oligarchies run by people like Bil Gates, George Soros, and Klaus Schwab – aristocracy.

Paine’s Common Sense proved to be so influential that John Adams (1735-1826) reportedly declared, “Without the pen of the author of ‘Common Sense,’ the sword of Washington would have been raised in vain.”

It is very hard to get the word out when the press is no longer free and conspiring with these modern oligarchs to impose Communism 3.0. Here we have what used to be one of the most prestigious newspapers, the London Financial Times, advocating the overthrow of Capitalism. They are joined by CNN, the Washington Post, the New York Times, and Twitter, YouTube, and Facebook just to mention a few. 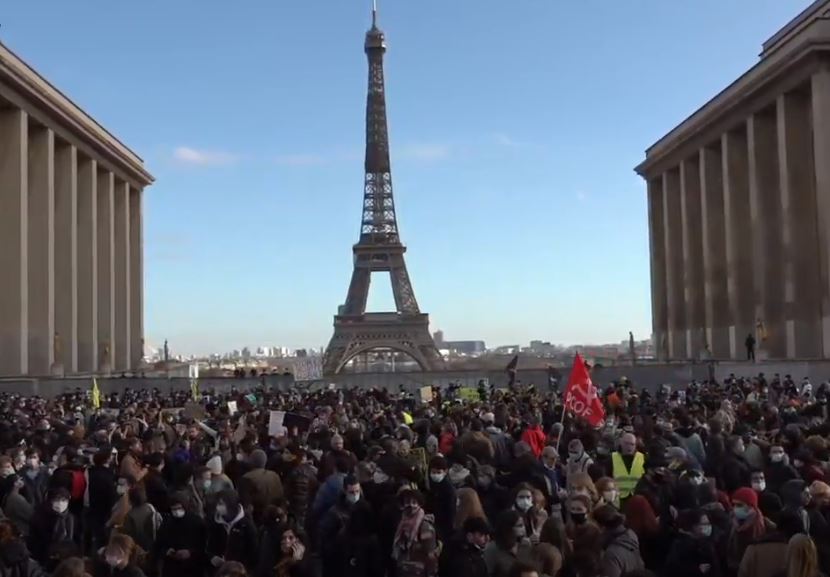 We may see the first ray of hope emerging in France. They already had the Yellow Vest Movement organized so they are well ahead of the game at this point in time. In America, we at least have guns to defend ourselves against the tyranny which many other countries do not. We are probably at that same moment in time before the publication of Common Sense that grabbed the attention of the people. What we must be careful to distinguish was that in 1776, most Americans were free thinkers which we lack today. They had the courage to leave for the New World and there were no welfare handouts. These were independent people, unlike we have today. So we are probably at about 33% today in people who voted for Trump who will not stand for this corruption. Once that crosses 40%, the revolution becomes possible.

COMMENT: Well, unfortunately from my perspective I don’t see any way out of this mess. People are willingly surrendering their rights. Nobody is standing up. I see 99% compliance with everything. It’s the boiling frog analogy. Turn the heat up slowly one degree at a time and the frog doesn’t realize they are boiling. Will there be a spark that awakens everyone? Or will it be too late and we will already be in the abyss? People just don’t seem to care.

REPLY: Most people who voted for Biden were clueless about the agenda. They bought into the whole hate Trump narrative. Talk to one and ask why Biden is better. There is nothing about qualifications, just that they do not like Trump. That leaves a huge door open and we are starting to see that in the Democratic Party as the majority want Pelosi out as Speaker of the House. There are a number of conservative Democrats who felt Pelosi disgraced the nation by tearing up Trump’s State of the Union address which is required by the Constitution when they already get a rebuttal on TV. Our greatest hope is that we will cross that 40% threshold with even Democrats who wake up and see that this is a foreign agenda – not domestic.

COMMENT: They are going to make life impossible if you don’t take the vaccine, aren’t they?

REPLY: I have been warning that this vaccine for a non-deadly virus is being used to separate those who are the sheep from the independent thinkers just as Stalin did. They may not create work camps as did Stalin, but we have witnessed the use of camps to confine people requiring them to prove they do not have COVID to leave. Not every place is the same. Where Victoria is a lockdown like a prison, others have escaped fleeing to quarantine camps up north in Darwin. Schwab has used his contacts from Davos to move politicians to adopt his Communism 3.0 because they can no longer service or sell debt and will never again have to stand for elections. The entire system is collapsing and the Central Banks are screaming – they cannot continue to buy the debt forever! Creating these registries of resisters is intended to be able to arrest them at any point to prevent an uprising. This is why they will impose a health passport to deny travel without a vaccine.

COMMENT: Unfortunately, due to this bullshit, our gardener, a very strong 40-year-old thought he had covid when he had a blinding headache and sickness for 2 days so he stayed in bed.

It was a serious stroke

Another victim of the bullshit

REPLY: There are more people dying from the lack of healthcare. Immediately, no matter what, they start with the assumption it is COVID. People no longer die of things other than COVID, which is seriously being overstated.