QUESTION: Marty; as you know I have worked on the bond desk and am now looking to get out and retire. You are so right. The 10 year is the old 30 year and nobody buys the 10 year with any expectation of holding it for 10 years. The debt has been sold only because of liquidity and that governments are destroying. Your piece on the free market sets the rates probably went over the heads of 99% of the people on the street including corporates. This whole game is imploding. The decline in the dollar is easing tension in USA but in Europe it is adding to deflation. Do you see this exploding in 2017 in everyone’s face? The Fed stated they were not sure negative rates were even illegal. The Fed knows this is coming to an end. Don’t they?

ANSWER: Yes, you are probably right. The average person thinks that the central banks control interest rates and assume that is the full line of maturity. They do not realize the central banks can only control the very narrow short-end, and they try to influence the long-term with their QE. The Fed bought in the long bonds (30 years) and cannot resell them. They will just have to wait for them to mature.

The liquidity is collapsing rapidly. This is very scary. The thinner the markets become the wilder the swings in both directions. Indeed, the 10-year has become the benchmark that replaced the 30-year. This is also why banks want to sell adjustable mortgages and will only do the 30-year as long as they can sell it to pension funds.

It is difficult to explain the interest rate curve because the vast majority of the people only hear the central banks are going NEGATIVE so they think that means all rates decline. They do not understand the FREE MARKET dictates the rest. So the crisis brewing here will happen when there is no bid. That appears to be coming for 2017. Politics will be part of the change as they will help to create uncertainty that will diminish CONFIDENCE, which is the only thing supporting the bond market.

The Fed’s concern about NEGATIVE RATES being legal under the U.S. Constitution is correct. There is no precedent for this and it would, in effect, be a tax on money. But the Fed knows that NEGATIVE RATES are wiping out pension funds and the elderly. This is why Yellen has been saying rates have to be “normalized.” However, a currency rises as a country declines, at first. This is why the euro and yen caught a bid. As domestic players need cash, they have to bring it home. The yen rose into 1995 as the Nikkei was declining. The U.S. dollar rose into 1931 as we saw the Great Depression. So a decline in the dollar right now will INCREASE profits for domestic companies with assets overseas. The only thing that will make the U.S. economy really tank is a STRONG DOLLAR. That still appears to be 2017-2020, aided also by the War Cycle. 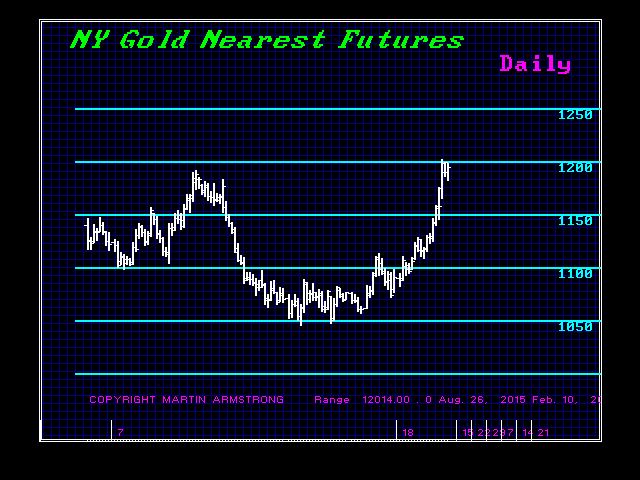 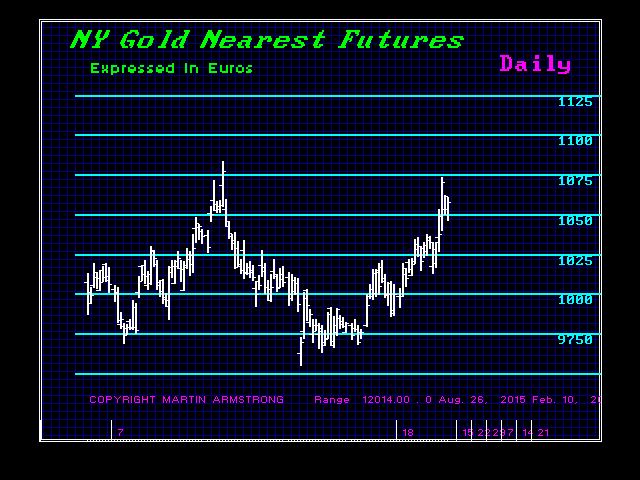 The decline in the dollar, which is buying time in the States, is indeed fueling outside deflation and will make their economies even weaker. People always get this wrong and look at the currency as they would a stock, believing that up is good and down is bad. They have a hard time seeing the world through the eyes of currency. Even gold is making new highs in dollars but has yet to do so in euros. It has to move above 1226 to do this and test the reversal gap at 1309.

« 2017: The Great Alignment
Gold & the February Crisis: The Prelude to Chaos »