An Interesting Observation of the World We Live in – Circus & Government 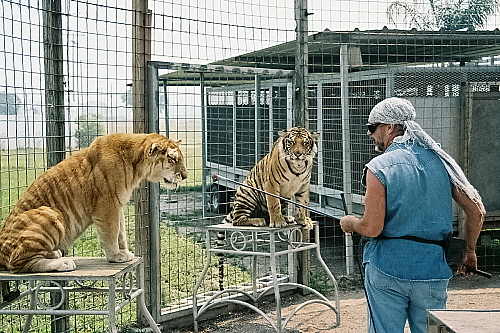 The contrast between your thinking and that of most governments and central banks with regard to the economy (the economic behaviour of real people with hearts and minds and hopes and fears) can be compared to two ways of considering animals.

Animal trainers use positive and negative reinforcements to get the animal to do tricks. The entire dynamic is one of the assertion of power and the assumption of superiority to the beast. Does the trainer really question the morality of his or her actions? The beast is treated well with plenty of food and security. They do not even see the metal bars that necessarily surround the animal at all times and the unnecessary intrusions of humans into its life: the animal’s very nature is being frustrated. “Always maintain control of the animal for the safety of the trainer” is the rule.

Governments and central banks poke and prod citizens to save or spend with positive and negative reinforcements, blinded by the arrogant assumption that people need metal bars and trainers to keep them safe. They are fully aware (or, at best, willfully blind) that their overbearing presence is frustrating the true desires of people to live in peace and prosperity. The economy, like the trained animal, is a fiction: it is pulled out of its natural habitat where its true nature is revealed to be involved in an incalculable array of relationships with other animals and with the environment. The safety of government is paramount.

I believe I am right in likening your thought to a contemporary nature reserve where animals are left in their natural habitats and observed. Most human intervention is negative, involving protecting the animals from poachers and the environment from degradation due to human activity. Animals are respected as animals, not the playthings of humans. “Let the animal thrive on its own terms” is the rule.

In your view, the economy is to be studied on its own terms and not “controlled”. Control is impossible as animal trainers who are attacked by their animal “friends” learn. Governments act to conform their policies to immutable trends for the good of people, not march into the lives of citizens, imposing an artificial circus ring with laws that will subdue and control the economy.

Circuses are waning in popularity and reserves are the better way. Thanks for your part in bringing this same trend to the field of economics.

REPLY: That is a very good observation. I fully agree, for economics has become the bastard pretend science where we are the toy. The elites in power see us as mindless drones to manipulate for their enjoyment and power trips, all while claiming it is about helping the poor against the evil class struggle.