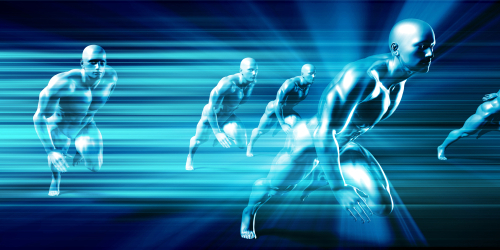 QUESTION: Marty; All of these Robo trading plans are simply a flat model. Socrates is forecasting short and long-term rather than just trading a flat model. Am I correct?

ANSWER: Correct. The approach to modeling is traditionally flat. It will take one market and attempt to create a buy/sell model on that market exclusively to the exclusion of all other markets. This is the reason these flat models will blow up even such things as the Black & Scholls, which won the Noble Prize before it created the Long-Term Capital Management (LTCM) collapse in 1998. That is the subject of the book titled – When Genius Failed.

The flat model approach is a disaster. They will work for a while and then blow up BECAUSE they are incapable of grasping the wildcard contagion that comes from outside that single market. That is what happened in the LTCM collapse. The illiquidity in the collapse of the Russian market led to the selling of all other markets to raise cash to cover losses in Russian bonds.

There are plenty of people who are soliciting money claiming they have “mastered” our model. That is absolute nonsense because they are interjecting their own OPINION and that will be a guaranteed loss down the road. This requires NO OPINION and the fact that someone will try to supplement by writing reports on markets shows they are basing their trading on their own opinion of WHAT they think the market will do. 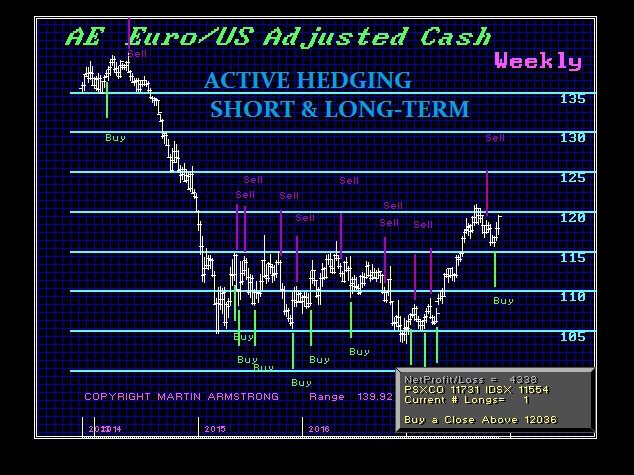 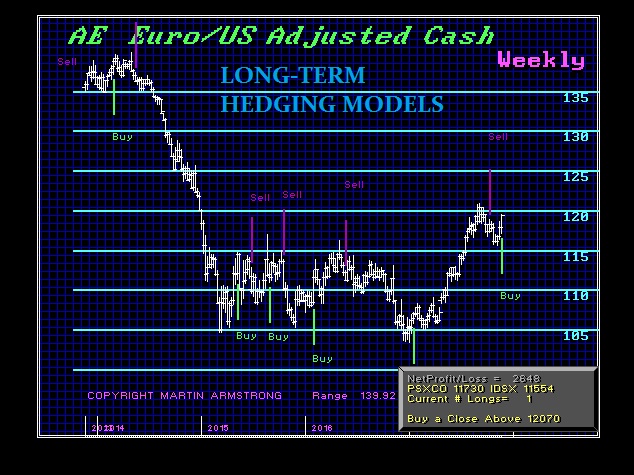 Here is the Euro traded by Socrates just using Reversals without cycles from a pure hedging perspective. There is a huge difference between being more active using short and long-term Reversals. Hedging models are either long or short and DO NOT add to positions as they unfold as is the case with Speculation. Just using the long-term Reversals produces a different result but is less active so easier to manage. The short-term hedging model will be more active but requires paying more attention.

Typically, people want to trade more active because they THINK what they are doing is REDUCING their risk. This is not true. Sometimes stepping back reduces your stress and your risk at the end of the day. 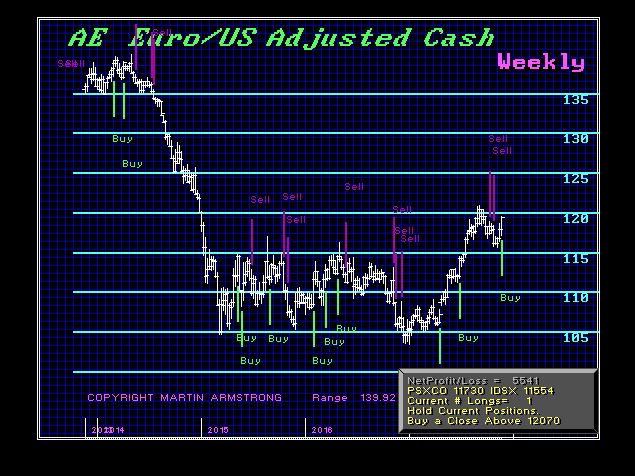 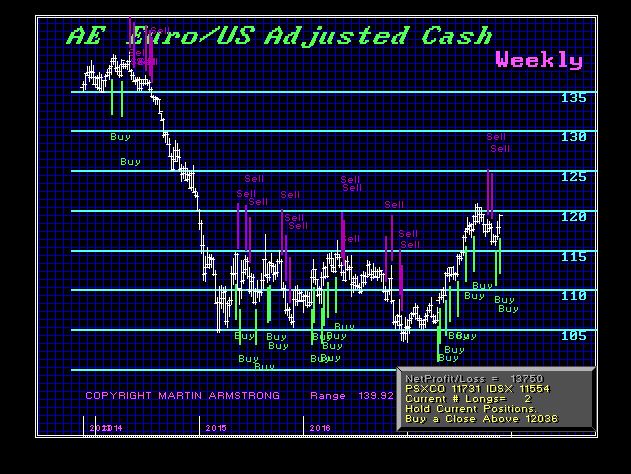 The examples offered here are exclusively using only the Weekly Level of activity. You can step back and use just the Monthly, Quarterly, or Yearly level. The trading performance will vary differently depending on what your objectives are. You can also use combinations of Weekly to the Yearly level.

Obviously, anyone soliciting funds management with our model trying to claim they are using Socrates are just not telling the truth. They will inject their own OPINION and that will override everything. I personally do not know ANY fund manager who has mastered our model that I would recommend.

We are reviewing REPUTABLE firms that will use our model WITHOUT interjecting OPINION. During the 1987 Crash when the Brady Commission investigated what they thought was caused by computer trading, they discovered that the computers were correct, the traders did not follow them. The very best unplugged the computers and lost.

I have stated numerous times that the VERY BEST trades I have done in my life were the ones that were the MOST difficult to do.

We will be looking to do a TEACHING seminar perhaps in Tampa in early 2018. We will post details when we decide to do this given all the requests.