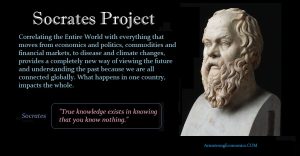 QUESTION: Marty; A friend of mine is an analyst at one of the major banks in New York. He said they are not allowed to forecast some things as you said. He used to work for a European bank and did say it was much worse.  He said everyone who is anyone reads you. He also said that none of the mainstream media will ever report on Socrates because you will put all analysis out of business. Is this why you intend to go public?

Thanks so much for your insight in creating Socrates.

ANSWER: Mainstream press in the USA has never been interested in really covering our analysis. They are not interested in reporting that a computer can actually write reports and forecast the entire world. You have to understand, we remain the best-kept secret. Even when Nigel Farage was our guest speaker in Rome, he said he had to come after we forecast BREXIT. Now, not a single British newspaper ever reported our forecast before or after. Nonetheless, those in power and in strategic institutions and corporations, all know what our forecasts were. So it is an interesting paradox. We are the best-read, but the most under-reported.

Nobody wants to report there is a computer that forecasts the world for it at the same time exposes the true trend of the economy and all the interconnections, including climate change. In the summer when the Inverted Yield Curve was taking place, all the newspapers were forecasting Trump would lose because the economy was headed into a recession. That was their typical biased war against Trump. Our model showed there would be a moderate decline in the expansion into the ECM for January, but that we did not see a major correction or a major recession.

These types of forecasts are not luck nor are they based upon what “I think” for we are all human and thus we are subject to making mistakes. We need a dispassionate analysis of a computer to provide an objective outlook. People keep trying to compete with me personally which is often quite funny to me.

Socrates will only be recognized when (1) we go public, and (2) after my death. That is just how things work. Even in the Bible, Jesus said that a prophet has no honor or is recognized in his own country’ (John 4:44). That is the way it has ALWAYS been in every field. Not exactly sure why it is that way. It just is! I have always been covered more by the press outside the USA than inside.