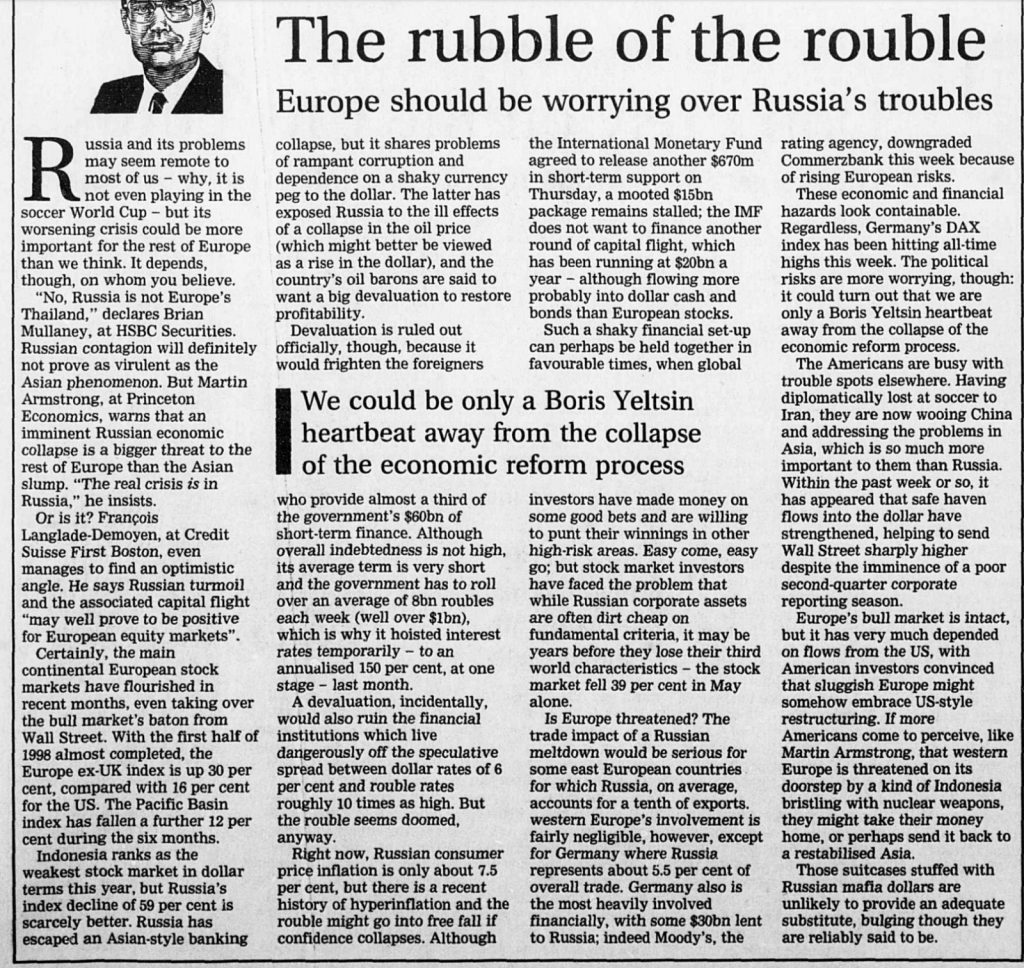 QUESTION: Marty; My cousin in Britain who works in the government said the governments are acting insane because of your model. They timed the Covid-19 pandemic to coincide with your turning point January 18, 2020, and then the lockdowns are because your model has been forecasting the rise in civil unrest and then the collapse of the monetary system. He said there is not a government that does not follow your models after Margaret Thatcher and your forecast for the collapse of Russia in 1998.

Do you ever consider not publishing when you have that much influence?

ANSWER: There are aspects and certain models I will not publish. I spent 7 years in contempt for refusing to turn over the source code to my models. The movie “The Forecaster” could NEVER have been made without insurance against slander and libel. The New York boys were after the model — the source code to be precise. They even put that in writing so I had to provide all the documentation for Llyods of London to insure the production of the film. If every allegation could not be proved, they would never have been able to make the film. The government was given the opportunity to be in the film and give their side. They refuse to ever cooperate with the producers. I was released ONLY because I got into the Supreme Court which ordered the government to explain how I could be held for 7 years on a statute that stated civil contempt maximum is 18 months – 28 USC 1826.

CNN even reported first that the money laundering at Bank of New York involved stolen funds from the IMF loans which was what they were blackmailing Yeltsin with. They quickly buried that truth to hide it from the public. That is why Yeltsin stepped down and handed it to Putin. The movie has been played around the world, but it was banned in America. Why? Only because it hit home. Curious how not even Fox News will report what took place in 2000. No American media will report US interference in the Russian election of 2000. Why? John McCain sponsored the Magnitsky Act another film banned in America on this subject. The USA, under the Clintons, interfered with the Russian elections of 2000 and that is how Putin came to power. Hillary accused the Russians of doing what she authorized to do to Russia.

Why do you think everyone tries to avoid our forecasts and pretend Socrates does not even exist? They would not dare to report that we have created the only fully-functioning Artificial Intelligence computer in the world. They do not like what it forecasts because it exposes the truth.

Perhaps you are correct and everything they are trying to do is because of our model. It still changes nothing. At best, it merely will increase volatility. They are looking to cancel the currencies and move to digital currencies because the monetary system is collapsing – hence the Monetary Crisis Cycle. The ECB lowered rates to negative in 2014, and 6 years later, their experiment has failed. They are now trapped and cannot raise rates. There is no place to hide. They cannot sell new debt to pay off the old so the ECB has to keep rolling the old debt they bought over the past 6 years – hence the Sovereign Debt Crisis Cycle.

Government officials reach out all the time. Even Nigel Farage had the courage to speak at our World Economic Conference in Rome in 2019, stating bluntly because we were the “alternative to Davos,” which is now even more apparent as we are head-to-head against Klaus Schwab and his World Economic Forum in league with Gates.

This collapse would have taken place without me. I do not believe Gates follows our model. Perhaps others convinced him to use January 18, 2020, for his timing. However, if he really respected Socrates, he would see his own demise.

So your question is interesting. I do not believe I have that sort of influence or they would listen and NOT try to defeat the model. I have no desire to go through all of this craziness. As I have said, I wish Star Trek was real. I would be screaming right now — “Scotty! Beam me UP!”