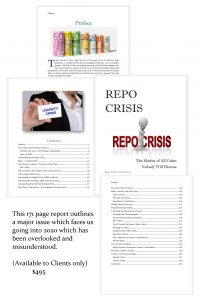 QUESTION: Marty, the BIS report just release is a joke. They blame the banks are holding treasuries and not lending. This is really a whitewash for that would explain a single event. It does not explain the ongoing liquidity crisis. Is this just propaganda by the BIS?

ANSWER: The claim that the four big banks were unwilling to lend was caused, in part, by the Basel III regulations that they created. They blame hedge funds for borrowing more in repo. None of this explains the real issues behind the crisis and it certainly appears to be disinformation to hide the much greater systemic crisis behind the curtain. They are clearly hoping to restore confidence by ignoring the real crisis. They mention that the European repo market escaped the crisis, but at least warn that it has become fragmented and poses a long-term risk.

We have placed the Repo Report in the store that explains those issues, but dives into the real crisis nobody will talk about. This report will include an update next year when Phase III starts to unfold.

« The Repo Crisis
The Mother of all Financial Crises »