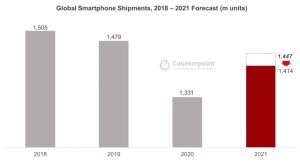 COMMENT: Hi Martin. Thank you for your work. The chip and supply shortage has not improved. I live in America outside a major city. My cellular device failed at the beginning of November so I ordered a replacement directly from Samsung. Best Buy and my cellular provider were both out of the phone I was seeking, and I went to around five stores. Shipping from Samsung was supposed to take a bit over a week, then two weeks, and now the ETA is in January. The stores I went into had Apple iPhones but not Androids. Frustrating.

REPLY: Now is an unfortunate time to need a new phone. Numerous original equipment manufacturers (OEMs) reported failing to secure crucial parts this year due to semiconductor shortages. Counterpoint Research lowered their forecast of global smartphone shipments from 1.45 billion units to 1.41 billion. Their study further suggests that smartphone OEMs only received 80% of the crucial components they need this year to manufacture phones during the second half of the year.

Samsung completely canceled their Galaxy Note series this year as they knew they would not be able to obtain the components. “Samsung, Oppo, Xiaomi have all been affected and we are lowering our forecasts. But Apple seems to be the most resilient and least affected by the AP (application processor) shortage situation,” Tom Kang, a researcher with Counterpoint reported in October. Kang’s research did not indicate why Apple was more immune to the chip shortage. Numerous companies are racing to produce highly in-demand chips, but it will take time for manufacturing to begin.