QUESTION: Marty; Just wow. You called the day of the high and then said the market would make a new low yesterday, a directional change would take it back up and that was the low. I do not understand why the world is not knocking down your door. Then again, I guess they did that’s why they overwhelmed your site trying to buy-in. You once said that the cycle can extend into 2032 and an indication of that would be a correction from 2018. You said at the WEC that it did not necessarily mean we would break last year’s low. So is that what is unfolding? Is everything extending from 2021 to 2032?

ANSWER:  The Global Market Watch called the event perfectly. It called for a Waterfall and noted the January high was Important. It picked a similar pattern on the Quarterly level. It came back and identified yesterday as a low as well. This proves the computer did this all by itself. When it picks up patterns, you know it is not biased and there are no human emotions involved. Human judgment is where the mistakes come into play.

We have a turning point in 2020 which has been there on point for years. With 2018 being a Panic Cycle Year, there is the risk of a 2020 low and then you extend the rally out into 2032. This would be indicated by electing a Monthly Bearish Reversal and we must penetrate last year’s low of 19,677.94. However, because this is a Panic Cycle Year, you often take out the high and low or the year before. We have made a new high. So that means if we breach last year’s low, then we end up with a hard recession into 2020 in alignment with the Economic Confidence Model. Under a flat model, yes 2020 would be a low. But is that too easy?

So no, we cannot yet rule out a 2020 low. It all depends upon breaking 19,677.94. If that unfolds, then we are in for a major economic crisis on the Monetary Crisis Cycle going into that which began here in 2018 and goes into 2021 when it goes completely nuts. This means we are treading water right now. Yes, we will go back to new highs. There is no doubt about that. Those who are calling this a super bear market are using flat models as always. They are simply taking the past and overlaying that on the present and proclaim the end of the world as always. 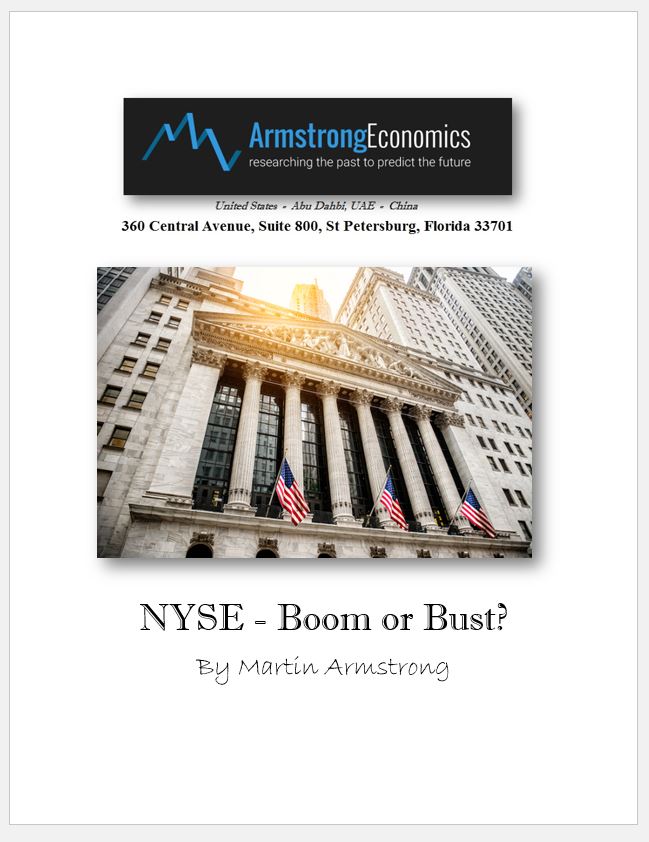 It is far more complicated than that and they have no clue of Cycle Inversions of the impact of Superposition effects injected from external markets. To get some super bear market means cash would swing into government bonds and out of equity. Gold should be rising yet it fell also on its Benchmark. Everything is not aligned with the classic super bear market. How can you have such an even with interest rates at 5,000 lows and governments unable to fund themselves? There is much more at stake than meet the eye.

I am rushing and writing right now the long-term scenario and providing the arrays out for the next 12 years. I will let everyone know as soon as it is out.