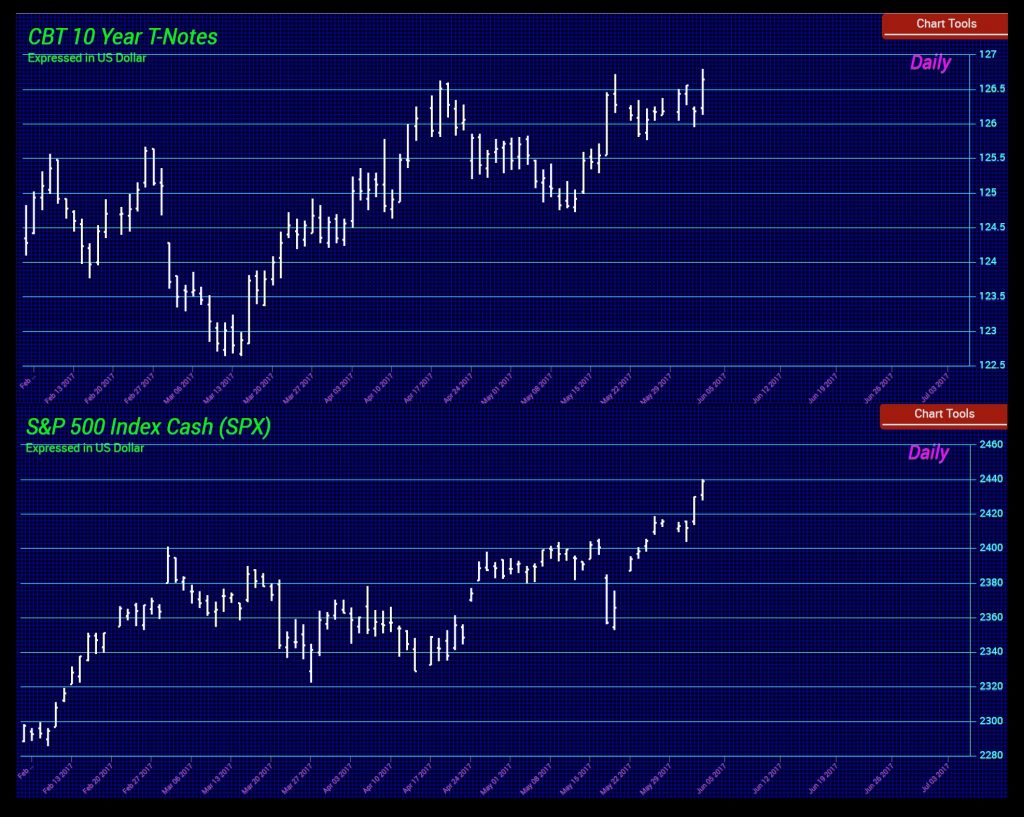 This coming week is what we would call in horse racing a trifecta with former FBI director James Comey’s testimony, the U.K. election, and the ECB monetary-policy meeting. Then our capital flow models seem to be picking up European buying of both US shares and bonds taking advantage of a rally in the Euro. The big money seems to have no faith in the Euro and is looking at rallies as an opportunity to divest more out of Europe.

On Friday, the government bonds remained in rally mode, pushing the benchmark 10-year Treasury note yield to a seven-month low as American pundits on Wall Street keep rubbing their eyes to make sure they are really awake. Stocks up and bonds up is a very strange thing for them to experience. The simultaneous run-up in stocks along with government paper has many just scratching their head. Does this mean the Fed will not raise rate? They are hard pressed for explanations when they only look domestically.

The 10-year Treasury yield fell from -2.17% to 2.15%, which is its lowest level since mid November. Even the Dow is starting to make new all-time highs at the same time.  Some have watched the unemployment number drop to a 16-year low at 4.3%. Some just think that equity and bond investors are not talking to each other and have been looking at different data. The bond pundits are watching the jobs numbers. Wall Street is pricing in two additional increases to benchmark interest rates in 2017. Others fear that Trump is in trouble and this puts at risk his whole agenda of deregulation, tax cuts and an increase to infrastructure spending.

The uninformed analysts actually think that weaker numbers will cause Congress to get behind Trump and push his agenda forward. That seems to be the least possible outcome. The likelihood of Republicans getting their act together when they smell blood in the White House is highly unlikely. Politics and posturing always come before the people.

The bottom line? Simply, we show capital inflows were running rather strong with Europeans looking to buy the bargains and China attacked the shorts in the yuan because of too much capital outflows. It may be a Comey testimony where he can say whatever he wants and the press will take it and run. But in Europe, the risk of the ECB collapsing is rising and this is why the sudden move to create a consolidated bond for Europe to find buyers to sell off what the ECB has bought and for European states to find funding when the ECB stops buying.

« Important Update on U.S. Stock Market
The Most Hated Bull Market in History »