Why Has Farmland Exploded in Price? The Accidental Trend Correlation

Most people have little idea WHY big money was targeting buying farmland in Canada, USA, and Australia. It was more than just Chinese investment. With interest rates down to negative, capital has been looking for returns. They were buying farmland and then renting it out generally for 5%. This created what many call the farmland bubble which has now begun to burst in some Corn Belt states, such as Iowa, as interest rates begin to rise. In 2015, the average increase of 2.4% percent on the low end and up to 8% in some states where the crop yields were best. This has not been a small investor or spec market. This was driven by the big boys seeking yield thanks to particularly the European Central Bank (ECB).

The nominal high came in 1982 and the commodity boom peaked in 1980 and interest rates peaked in 1981. The rising dollar caused the correction in nominal terms declining into its low in 1987. The market began to recover while the days of inflation and goldbugs faded forging the final low in gold during 1999. As is often the case, people just never look at assets in terms of international value. The surge in prices of latter that domestic analysts have called a “bubble” truly reveal more of a Phase Transition type rally more than doubling in price when plotted in Euros. The key to any market lies hidden within the depths of international capital flows which are driven foremost by currency values. 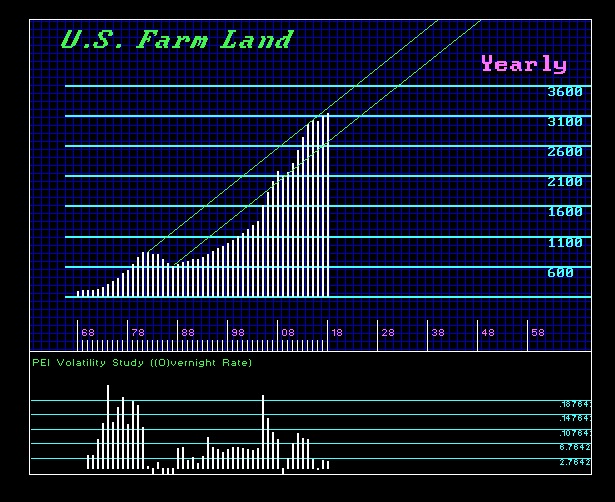 The lack of individual investors infiltrating this market leaving the big agricultural bets being placed not on expectations of global food demand will increase over time, but looking simply for yield, has led most analysis astray. Institutions, like the pension fund TIAA-CREF, have been the big buyers throughout 2017. They have been looking for bargains as farm real estate values have started to decline. Small farmers are finding it difficult to borrow from the banks for a crop season which can involve loans into several millions of dollars. If crops are wiped out, then they have a real problem.

There have been stocks issued seeking to capitalize on the boom. Farmland Partners (FPI, NYSE) has been down about 20% since it was floated in 2014. It is a REIT which is a company that owns, operates or finances income-producing real estate. REITs were modeled after mutual funds to gather investors to collectively own valuable real estate and provide the opportunity to access dividend-based income and total returns. On its website, it states: “Farmland Partners Inc. is an internally managed, publicly traded (NYSE: FPI) real estate company that owns and seeks to acquire high-quality farmland throughout North America addressing the global demand for food, feed, fiber and fuel.” However, the play has NOT been the boom in commodities, but the yield from renting out the land.

Investors should be very careful with REITs because they tend to be illiquid and volatile. 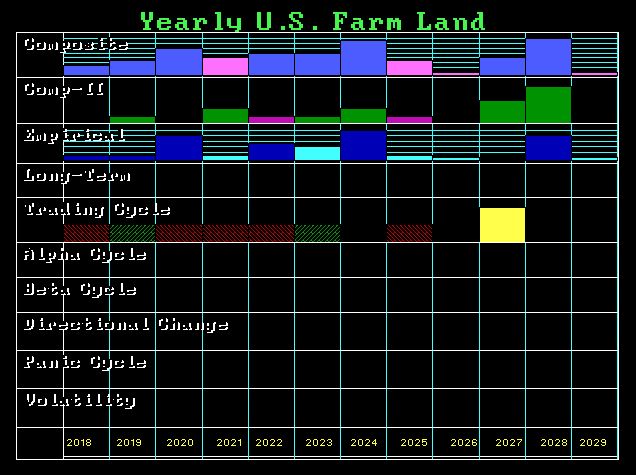 When we look at the Array, we see turning points lining up for 2020/2021 and 2024 followed by 2026 and then 2028. The commodity cycle appears to be pointing to 2024. That is when we should see farmland values peak in real terms but keep in mind that it will all depend upon the particular region. The weather is going to kick in and that will reduce crop yields. Keep in mind that most of these REITs have entered this sector of the market for the wrong reason. It was not truly a commodity boom expectation as it was simply to get a 5% yield when interest rates were below that level. As interest rates rise above that 5% threshold, we will begin to see the big players bailout and begin to dump farmland at losses. Anyone looking to borrow against their land should use FIXED RATES only. If you decide to sell your land to the big boys while rates are still below 5%, the include a right of first refusal to buy it back at a reduced price when they decide to cut and run – which they will inevitably always do at the precise wrong time.