Why Gold Stocks Rallied During the Great Depression 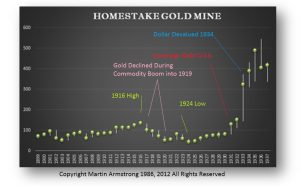 QUESTION: Hi Marty
Can you enlighten us on what happened back in history to gold mining shares in terms of why shares did not collapse during the crash of 1929 compared to what happened to mine shares in 2008?

What happened to the shares held by the public in 1933 when FDR confiscated gold?
So you were safe holding the shares!

ANSWER: You must realize that gold was money under the gold standard. You can see how it declined following the commodity rally during World War I and eventually bottomed in 1924. During the Great Depression, cash was king and as such Homestake rallied into 1930, but then began to break out with the Monetary Crisis in 1931. The sharp rise came in 1934 with the devaluation of the dollar. Therefore, any comparison to modern times is irrelevant since we are not on a gold standard. Gold now responds in the opposite direction of the currency.