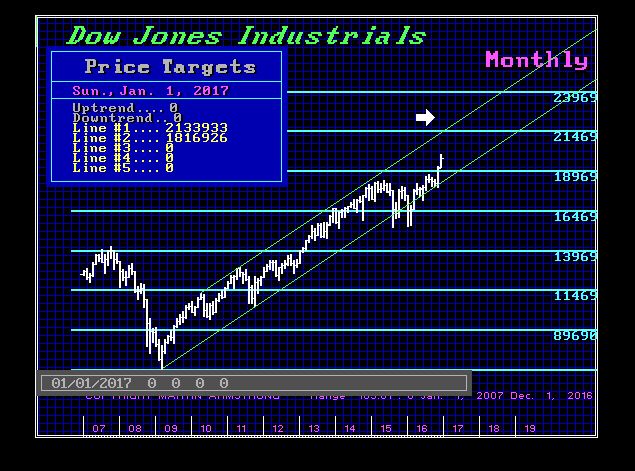 The Dow made a new high on Friday, but we failed to closed above the 2016 high. We still see the next major resistance level in the 21000-23000 area. A Phase Transition is only likely exceeding that level.

Gold has bounced but the resistance stands at 1197 level with support at 1130 zone. The lowest closing remains 2015 on an annual basis. We need a weekly closing back above 1222 to suggest any short-term sustainability.

Most markets, including the dollar, are really holding waiting to see what the Trump Administration looks like. The tax reform will clearly bring cash moving back to the States despite the leftist economist desperately saying it will not. Any company who does not take advantage of a 10% one-time tax compared to 40% would be one giant short illustrating that their management must be brain-dead. Nevertheless, we are on a wait and see alert for tax reform.

January is still a risk of a turning point in many markets. So you want to be careful with rallies in currencies or commodities at this particular time. The big turning point seems to be shaping up for April/May.