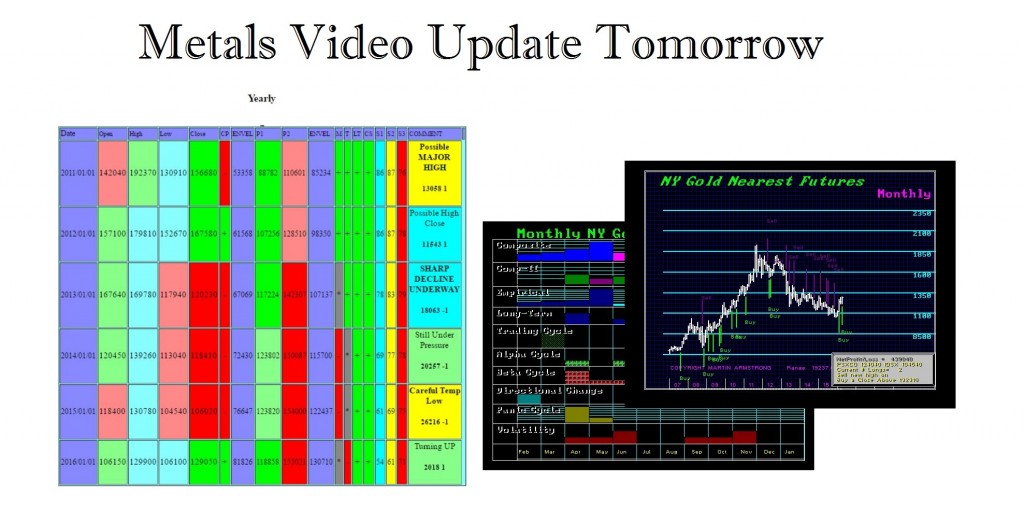 We will provide the Video Update for the Metals Tomorrow (for those who took the Metals Report). The computer does a far better job than any individual can possibly do, including myself. The hope of this correction ending by March 2016 and a bull market beginning has not materialized once we obtained the Quarterly Bullish Reversal at year-end in gold and held our year-end number at 1044. The dollar has not cooperated in ending this trend and instead all we have been getting are reversals warning we may be dealing with an extension rather than a conclusion. It would be nice to be finished with this mess, but the markets always need to suck in the fools to create the false move in order to fuel its movement. The Reversals and the Timing reveal the trend. The fact that gold never elected any Yearly Bearish Reversal from the 1980 high during the 19 year decline is why the computer has always been projecting higher highs in the years ahead. Without electing Reversals through each level, then the trend does not change long-term in either direction.

The Yearly Global Market Watch, which is pattern recognition, has been on point and gold bottomed on the first Benchmark to the day in December. This model alone picked the 2011 high as a Major High and then 2015 as a temporary low calling for the bounce into 2016 which we have experienced. The mere fact that the computer can project a target in time years in advance and it unfolds on that day is interesting to say the least as it did with the Benchmarks was rather incredible. Such accomplishments are always ignored by those who do not want to believe. As Julius Caesar said, Men willingly believe what they wish. No amount of facts will ever change their mind so that is fantastic for we always need someone to trade against. Statistics show the vast majority of traders and investors lose money. They are the engine that fuel the market swings as they buy the highs assuming a breakout and sell the lows as they become pessimistic. Such events put flesh on the words, fools are easily separated from their money.

The timing models have been pointing to May 2016 ever since and we first elected a Quarter Buy Signal at the end of 2015. Since then gold has been electing various Weekly Bullish Reversals and as of Friday, it has elected its third Monthly Bullish Reversal. The hope of the global trend coming to an end here in 2016 has been negated by the immediate rally, but also evident by the prolonged trend for the Euro as well taking much longer to retest resistance. This too only prolongs the inevitable.

The way all the markets are situated globally, the overall trend may be extending this water-torture test to its extreme. Everything now will be determined if we exceed the 2015 highs in many markets or stop short there of once again. May is the turning point that warrants our attention around the world. The failure to break the 2015 highs in many markets during May will be a serious signal by itself. The rally will be over ONLY when we begin to elect Bearish Reversals. So stay on point and never been the fool who buys in anticipation of a new high. Always let the market prove itself for nobody can ever beat the markets. They alone are never wrong.

For the metals to actually enter a sustain bull market requires a collapse in public confidence. We can see this is starting to brew with Trump and Bernie attracting a lot of votes. That is the beginning of the trend which is necessary to reverse the entire landscape in the financial markets.