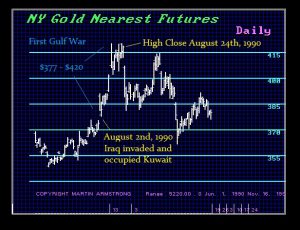 QUESTION: Mr. Armstrong; you are the only person who forecasts gold without bias. How will gold respond to the war rattling with Iran?

ANSWER: They will always paint gold as the a never ending bull market in the face of war. Perhaps us old-time traders learned the hard way – buy the rumor but sell the news. If we look at gold’s performance during the first Gulf War in 1990, it rallied upon the Iraq invasion on August 2nd, pulled back on the 3rd testing $377, and then rallied peaking on a closing basis on August 24th, but it hit $420 in just 7 trading days. When it appeared that the West would invade, gold declined and eventually it made its 19-year low in 1999.

It does not yet appear that we are looking at World War III. However, that may change by 2020/2021. We have to see how this interacts with our numbers. We must always approach this from a plain black and white perspective. Trump does not want to send in troops. The problem has been that the Democrats in bashing Trump have used Russia to the point that 70% of Democrats believe Russia is our moral enemy. They have demonized Russia so from a strategic perspective, Russia must back Iran. There will be no choice. Continued confrontation with China risks restoring the Russia-China bond that Richard Nixon broke.