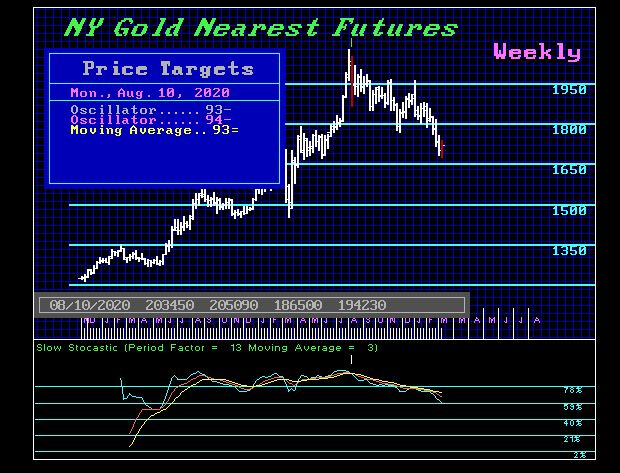 COMMENT: Marty; I just wanted to tell you an old friend of mine is still a gold bug. When I said I follow you and have actually made money, it was like you were the antichrist. He said you support the central bankers and they create endless amounts of money to fund the military but then keep gold capped to make the system work. I could not even follow his argument. Then he said you were conspiring with the bankers to take your client’s money. When I said the bankers had to return the money and you had no restitution, he just ignored it. He just said gold is dropping because of you.

Whilst I do not comprehend the argument, it just seems to be vengeance because he has been wrong. You seem to be blamed for everything.

REPLY: I really do not know what to say. Even a trend following stochastic turned negative in August 2020, and 2020 was 21 years up from the 1999 low. It failed to close 2020 above a key yearly buy signal. Some of these people just want to blame others for their own mistakes. He is obviously not someone who is ever going to become a professional investor. As for the central banks printing money to help the military, that’s a good one. Never heard that one before.

I will be doing the gold report soon. I have been so busy trying to get out two books and dealing with so many companies in trouble because of COVID that it really makes me so sad. Socrates writes over 1,000 reports every day. Surely, I could never do that. But they love to blame me personally rather than be objective. There are not enough financial analysts in the world to cover all the markets Socrates does daily. When I am dead, who will they have to blame? It will be like when communism fell. They suddenly had to find a new enemy.

As for the restitution issue, the docket clearly states that the bankers “co-deft” paid the restitution. That was their deal. They agreed to return my client’s money provided no bankers went to jail. That is how New York always works. And they put a lifetime gag order on me to prevent me from helping my clients sue HSBC, which has been involved in numerous criminal activities. But the game is always rigged. The bank pays huge fines so nobody goes to jail, and the shareholders always end up paying for the illegal activities of the bankers. It is always a one-way street.