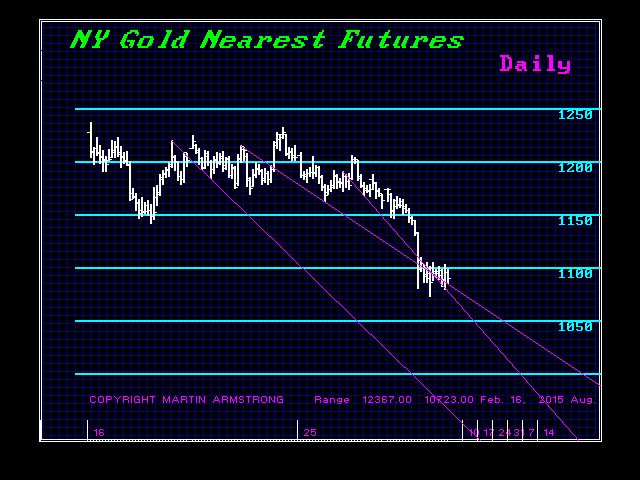 Gold remains extremely weak. We need a daily closing above 1108 to say the low is temporarily in place and a bounce back up is possible. The 1080 level is critical support on a daily closing basis, and it remains possible that gold can break to the downside moving into September if the July low gives way.

Since the Monthly Bearish at 1155 was elected on the closing of July, typically we would see a rally back to that level to retest it before we see lower prices. A two-month reaction rally into September would then result in a renewed decline into the Benchmarks.

The entire commodity sector is collapsing – not just gold – which illustrates that gold is not being manipulated. China’s days of growth of 12% annually are over, and their numbers reflect an economic contraction. Demand for commodities has declined, and this is all part of the DEFLATIONARY wave underway. When you open your eyes and look beyond gold, you can see the whole trend.

« The View on Gold and Silver
Hedging vs. Trading – What Really Makes the Low? »