QUESTION #1: Marty; On the Private Blog 1/19, you wrote “When we look at the Weekly Array, we can also see volatility rising this coming week. The two key weeks ahead are those of 01/27 and 02/17. Therefore, failure to make a new high warns that we may see a retest of support ahead. We see February is a Double Directional Change. This is clearly warning that we have to play this by the numbers. Do not anticipate the future for when we look at the Overnight Volatility indicators, this too has begin to rise sharply here in January.”

We have reached your next target and during the week of 02/17. Is this all being driven by the Repo Crisis and what seems to be a panic to the dollar?

PS: Thank you Socrates. He has traded gold very nicely.

QUESTION #2: I have read your blog for a few years, and to be honest since I’m so far from whats happen behind the shine, I really not understand everything. Then is the language against me as well since it’s not my native language.
Know to the question.
We who are a little older think gold is safe heaven. But if I talk to younger people do they see a future in cryptocurrency. I have read a lot about them. The best known is Bitcoin. The main issue is for payment. Then does it exist a few thousand others with many other characteristics, everything from follows golds, paying bus tickets to smart contracts. Whats is common of all those in the ledger is public and almost impossible to tamper with even for a state with all its resources. In a central database can a state always go in and change things, but in the blockchain is it not possible in the same way.
Some people think it will be internet 3.0
Money and value have been represented by many things throughout history.
How do you see on blockchain and its future?
Is it possible for governments to stop development in the long run?
Regards
BEk

QUESTION #3: The goldbugs are cheering the rally and you can see them foaming at the mouth. They really do get so emotional with every rally. You mentioned at the WEC and again in Vancouver that gold has been doing much better in foreign currencies which is why it has been rallying. Do you think the goldbugs will ever understand gold’s role in the financial system via the dollar? Or will they just always be wrong claiming the stock market and the dollar must crash so just buy gold?

ANSWER: There were many markets which were lining up in February and then we have important turning points come May/June. There is clearly a panic to the dollar on a global scale and this is part of the Monetary Crisis Cycle we are headed into. It would have been nice to see a pull-back that would have created a fake sell-off in the share market etc, but this is shaping up to be something much more serious. With the insane machinations in politics with Bernie Sanders leading and Biden seems desperate at this point with Bloomberg trying to buy the White House, the 2020 election will certainly contribute to the instability later in the year.

The election of the Yearly Bullish Reversal in gold at the end of 2019 was a warning that we are facing this Monetary Crisis Cycle and we see the Euro dropping like a stone. The old scenario that the dollar must crash to see gold breakout is turning into a bedtime story for children. As I have warned many times, when the real crisis is upon us externally outside the USA, then gold would rise with the stock market and the US dollar. This is all about capital flows.

There is definitely a major shift among generations that does not speak well for gold long-term The older generations see gold as a safe haven but not the younger generations in India and China are still buying gold, but to a lesser extent than their parents. That is more of a hedge against their local currencies.

Even BitCoin was scheduled for a rally into February and it has yet to test the Downtrend Line. Here too, March remains as a Directional Change. As far as Blockchain is concerned, I do not think that is the issue. The pitch that was coming from the IMF under Legarde was that countries should create their own cryptocurrency and then she implied that they would effectively outlaw private cryptocurrencies. I believe, based upon reliable sources, that governments have stood-by to observe if the public would embrace electronic currencies. Once they became acceptable, then they would end paper money and private cryptocurrencies and force all money into their version where they could get 100% of the taxes they ever dreamed of. They will also use terrorism as a justification. 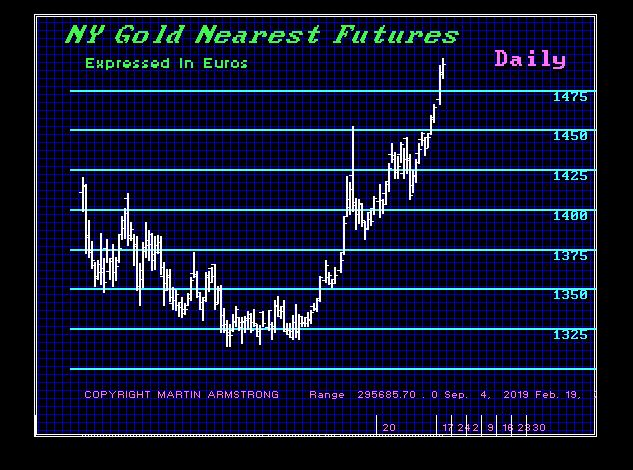 As far as looking at gold or anything in terms of currencies has never been a common trend. Nevertheless, it is critical to see the overall trend. I have stated MANY MANY MANY times that my definition of a REAL Bull Market is something that rises in ALL currencies. This is what gold has been doing since the Pi target on the ECM and once it elected the Monthly Bullish Reversal at 1362.50. We can see that in terms of Euros, gold broke out to the upside well in advance of its movement in dollars.

On the Pro Version of Socrates, you get the arrays for those who are more traders. There you can see the key days, weeks, and months. The goldbugs tend to keep preaching the very same scenario today that they did in 1975. Everything must crash and only gold survives. That is just not plausible. They tend to get a fresh crop of people to burn in an endless cycle. True, they are getting all emotional and are judging the entire next 10 years all because gold just exceeded $1600. How quickly they forget that every market oscillates up and down.

The Repo Crisis is a major liquidity crisis that reflects the collapse in confidence impacting Europe and Japan in particular. This is the precursor to the Monetary Crisis Cycle and the Mother of All Financial Crisis which is on the horizon.