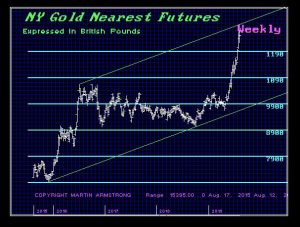 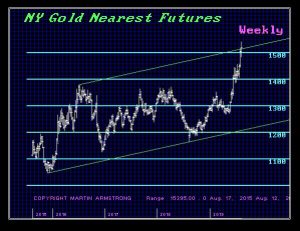 QUESTION: Hello Marty,
I have a question about Gold & Silver in other currencies – namely GBP.
Accepting your rational, with evidence I must say, that precious metals are a reflection of the confidence people have in their countries currency, you can see from the price of gold & silver in GBP and EURO that leading up to the Brexit referendum until now confirms this.
When you look at the ECM for this period – 2015.75 up to 2020.05 – you can see that there are three main waves to it. One wave down from 2015.75 to 2016.825, then three shorter wave from 2016.825 to 2018.89 – single consolidation wave?, then a third wave down from 2018.89 to 2020.05. Gold & Silver rallied, consolidated, then rallied again within this ECM period.
Does Gold & Silver have their own internal cycle?
Will your upcoming report include content on Gold & Silver in other currencies?
The trade in Gold:GBP since the ECM turning point of 2015.75 has been very lucrative – thanks for your service and opening up Socrates for us.
Regards,
AJ
England.

ANSWER: When you plot gold in dollars and pounds, you can see the steepness in the pound. This has been the strength in gold in dollars. It has been the hedge, not against fears of inflation in the USA, but it has risen in the face of the fear of a recession OPPOSITE of its previous relationships. This is all because we are approaching a Monetary Crisis Cycle.

Forecasting gold in dollars is pointless for that will be irrelevant to those in different countries. So yes, our report will be in terms of all the major currencies so people can make the appropriate decision in their own currency.